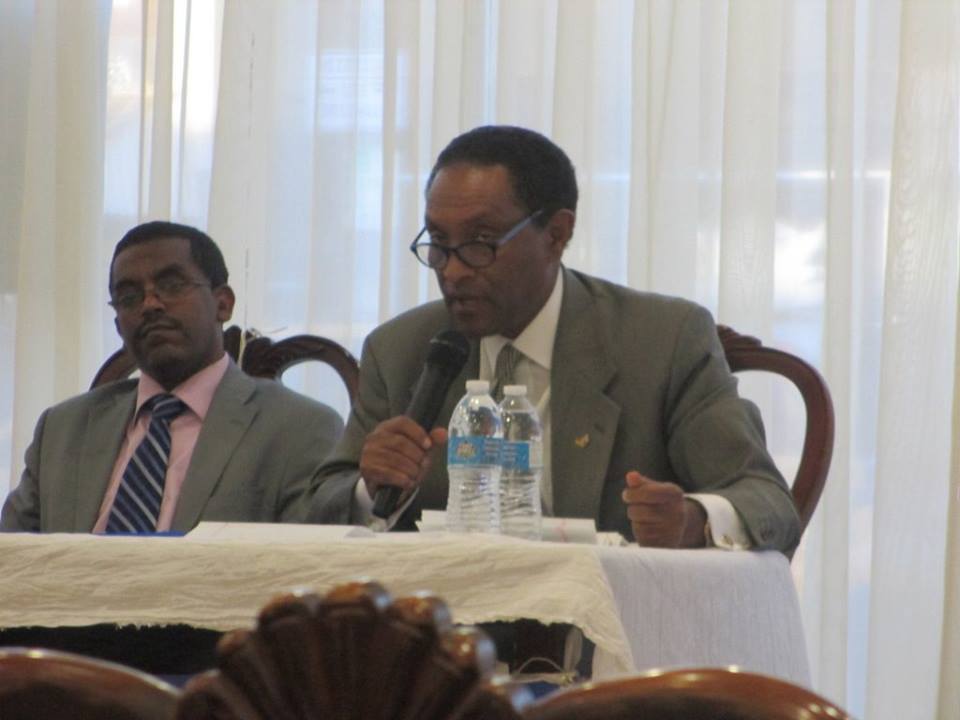 To be transparent, this article is solely based on his presentation as part of the Selamawi Party delegate here in San Jose, California, day before yesterday, January 4, 2014. I had not read Professor Alemayehu Gebremariam’s article on the Cheetah and Hippo generation that he posted on Ethiopians websites and the critical remarks some had written per his remarks at this time when I wrote this article. I attended the meeting called by supporters of the Selamawi party.

I went to the meeting to learn what goes on in the Ethiopian political sphere at home. There were many supporters of Selamawi Party. I applauded them for what they are doing at home and for sticking with non-violence. At this time of our political quagmire, the right form of struggle is unquestionably the non-violent form of struggle. I share this with them. The sacrifices they pay show their determination to contribute to the struggle. Here I give my admiration without reservation. True to our tradition of late start and punishing the early comers, the meeting started an hour late with Professor Alemayehu Gebremariam being the first guest speaker. I agreed his urge for supporting Selamawi Party and his advocacy of the rights of the individual Ethiopian rights. When he stated the Cheetah and Hippo analogy and portrayed Selamawi Party as the party of the youth and stated the support for his remark, I did not like it.

I understand his frustration of the struggle not going fast enough and the absence of a real central leadership for the movement. Taking that into consideration, after he finished his speech and a break was given; I went to him in private and told him how it will hurt the party being portrayed as a party of a section of the population when our country needs unity at every front. He told me to bring it as a question and I told him I would rather he correct it in a way to help the party. He told me he will address it next. Then Ato Yilqal took the mike and addressed the people. After a short briefing Ato Yilqal also echoed the Cheetah and Hippo analogy with the same emphasis as Professor Alemaehu Gebremariam did. This rang a bell in me and I wanted an answer. I took the mic when question session was opened and asked both the speakers the following:

“I came here to learn what goes on inside Ethiopia. I am not a member or a supporter of any party. This does not absolve of my responsibility to support the struggle of Ethiopian people against the Ethnic Dictator Illegal Government. Every party comes here and goes only to raise our hopes and disappear. The ethnic dictator illegal government in Ethiopia is ruling like an invading force and this calls for a united force of resistance. At this time of our political struggle, what we need is a central leadership for the liberation of our country. What are you doing to form this urgently needed front? I want to remark that I do not like the cheetah and hippo analogy. It will not help Selamawi party in its quest of getting the support of the Ethiopian people as a whole.”

To my surprise, both speakers not only defended their Cheetah and Hippo generation analogy, but elaborated it further and claimed there are no parties that are worth forming a front with. This sent a shock wave in my spine. Here is a promising party that is working hard, paying price and on the correct path. Then there is a fundamental flaw to their principle of their political existence. They claim they are the party of the youth! And professor Alemayehu Gebremariam forwards the Cheetah and Hippo analogy. This is wrong in two ways in the Ethiopian political reality and hurts the struggle of the Ethiopian people. This is the core essence of this article.

George Ayittey stated the following when he used the cheetah and hippo generation analogy.

“If you look at the post-colonial [African] history, you can divide it into two classes of people. There is the Hippo Generation; the Hippo Generation are the ruling elites. They are those who have monopolized political power and they are those who are stuck in their muddy, pedagogical patch. They are ornery, pudgy, and stodgy in the sense that they can’t explain why Africa is in such a mess. They blame everybody else instead of themselves. It is always colonialism! Imperialism! And they believe that the only way you can solve the problems in Africa is by giving the state more power and more foreign aid. That’s the Hippo Generation. It’s what has dragged Africa into this particular swamp. Africa is not going to move forward with the Hippo Generation, and it is on the back of this Hippo Generation which the United Nations, the World Bank, and the IMF have been trying to hitch a ride with this same old aid driven boondoggle. And that’s why we’re not getting anywhere in Africa. By contrast we have the Cheetah Generation. The Cheetah Generation is the new and angry generation of Africans who can see that their leadership have failed them. And the Cheetah Generation are those young Africans, you may call them the restless generation. They’re not going to sit there and wait for governments to come and do things for them. As a matter of fact, they’re not going to sit there and beg for foreign aid, because they can see that every social need in Africa is a business opportunity. The Cheetah Generation is entrepreneurial. So they are going to get off and take their own initiative to solve problems in Africa. Africa’s salvation and Africa’s future rests on the backs of this Cheetah Generation. They are the young and the agile and they’re fast, and you can see a lot of them. Many, many, many African countries who are not just sitting there and waiting for governments to come and do things for them. In fact, their outlook is refreshingly different. Asia has its Tigers; Africa will have its Cheetahs.”

One of the mistakes of the student movement of the late sixties and the early seventies is our copying of the foreign experience without any effort to adapt or align it to Ethiopian reality. I was part of it and take the responsibility per my role. At this time I see the same mistake repeated literally. Ayittey is writing about post-colonial Africa. He is focusing on those who inherited the administration of their country from colonizers, who were educated by the colonizers and who are in power. Yes, we are Africans. Yes we share a lot with our brethren in Africa. What is important is our struggle to liberate ourselves from the political predicament we are in right now. The reality is our bases. Copying is not the way.

Let us see how the cheetah and hippo generation analogy is not applicable to our struggle and how it hurts than hurts our cause. To begin with, the population distribution of Ethiopia has not changed significantly in the youth to elder ratio. Thus there is no reason to believe the present youth is any different in numbers than the yester years.