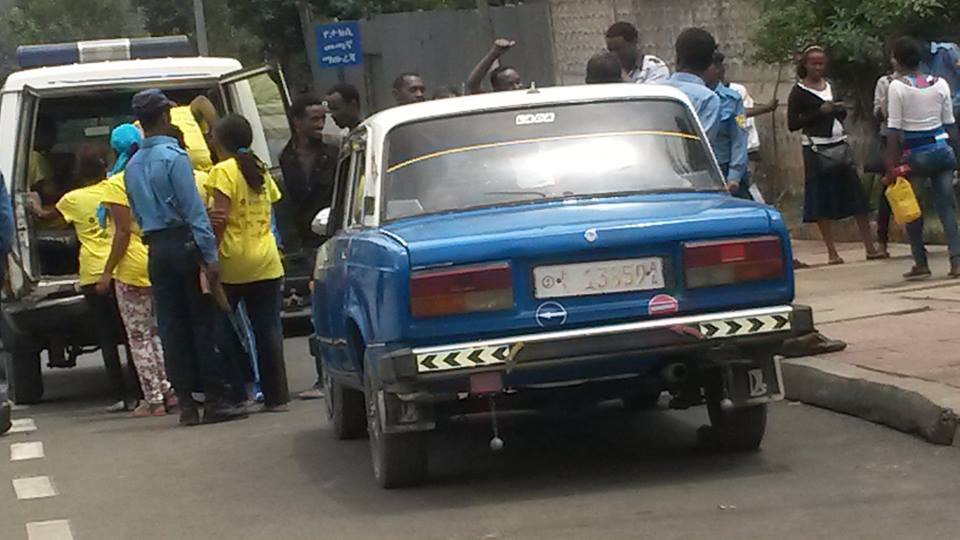 Early in the morning many gathered at the compound of the court house. The appearance was expected to be held at 10:00AM yet only the men arrived. It took the police about an hour after to bring the girls. Most were worried. Then we heard they were being forced to change their shirts that they put on. But they refused to change. After some quarrel at the police station finally they arrived at the court house at 11:08AM.

The court house was full of people, some even stood and it was quite humid. After the judge took his place the ones stood were much in number than those who sat. The attorney of the suspected and The Inspector how is handling the case stood by the sides; amid was Blue Party’s young members and leaders of high position.

The case was of course presented 5 days ago and ended with denying a bail for the young activists and members of the party because they were believed to terrorize and as well suspected of disturbance on Women’s Great Run which ended way peacefully.

In fact, the detail of the charge was literally mentioned and most find it funny and confusing at the time. The inspector namely Yemata said they were followed and caught saying out loud that: “they are daughters of Tayitu (Minillik’s II wife), they are daughters of Emeye Minillik, they are hungry, they demand political prisoners and jailed journalists like Reeyot, Eskinder, Andualam and others to be free, and they opposed the conspiracy of 5 to 1 policy which suppress women from expressing them selves freely and put them in fear” . . . these were the lists of slogans presented to be provocative and terrorizing. The men arrested with the girls suspected of supporting their deeds for they were found at the scene carrying their bags and materials.

Well today after 6 days in jail the police inspector, Yemata, with his mate still insists on denying bail for the same reason that they gave the first appearance. And this time they inquired 7 days for more inspection on the matter. Perhaps the addition accusation was that the police worry if they are able to be bailed out they would cause harm on the peace of the state in addition to that it was said the suspected doesn’t have a permanent address. 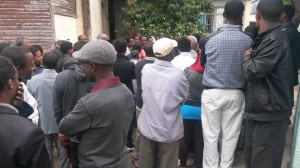 However, their attorney, Ato Alemu Gobebo (Father of Celebrated yet jailed journalist Reeyot Alemu), explained for the court that the accused members of the Blue Party are responsible citizens that works in different positions and each has a family that they live with which enables them to appear anytime they are wanted for further questioning. Ato Alemu farther explained that 10 of them are well disciplined and a committed party members that they struggle for a democratic and peaceful Ethiopia for that the allegation against bail is totally baseless and he added it was a conspiracy to keep them behind bars so that the assault continues.

In fact the victims were happened to be the arrested ones. Some of them put in plain words that they were threatened of their lives, and asked to work with EPRDF they are even offered a large amount of money if they work with the spy organization of EPRDF INSA. All stood still and resisted the intimidating of the so called interrogators who they said doesn’t even have an ID or a uniform on them. One of the incriminated, Nigest Wondifraw, told the court that the previous night three male police came to their cell at mid night and commanded them to go out and ordered her to go with them, and one of the three held a sweeping-stick like a cane and warned her he will beat her to death if she doesn’t cooperate with them. The others as well (specially the females) were separately called out in the late night the day before and threatened and assaulted. Two of them were even crying. The reason they said was that the police insulted them and added the insult is not that simple to tell, “it hurts, all they want is embarrass us so that we back down, they tried to hit us for they want us to stop our active membership and fellowship at the Blue Party.”

The judge was quite unsure of what to do. We believe he was trying to counsel everyone there instead of exercising his mandate. Seems he cannot do or say more than he was told to. Even the inspectors could not say more except denying all that has been said and dramatically insisted on the inquiry that they exact, more seven days.

Finally after a long talk the judge ordered the police officers to complete all that they are doing/interrogating and bring the case on March 18 and today again denied their freedom; no bail. No justice. We as a blue party members and leaders in general will not be demoralized or won’t back down for we precisely know the character of the dictatorial rule. The scenario which is taking place even showed us a glimpse of the sacrifices we must go through. One of the girls has two daughters; the others are very young and enthusiastically want to contribute their best to the country. All they did was exercising their freedom; they stood and voiced the voice of million women who live in fear. The women of the Blue Party on women’s freedom day demanded FREEDOM, JUSTICE and EQUALITY exceptionally for all the women in Ethiopia and through that for their brothers and fathers as well. Where are they now? In prison! We demanded their freedom for they are freedom fighters.