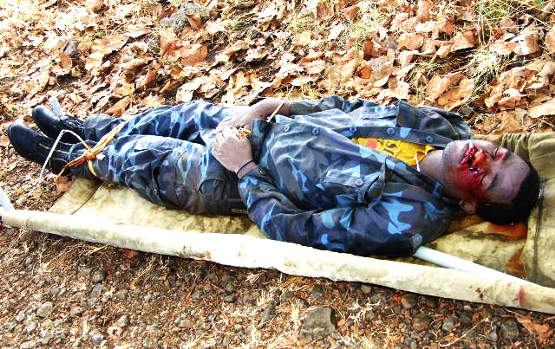 Last Sunday May 12 a Federal police officer opened fire and murdered twelve or eighteen people depending on who is doing the counting in the City of Bahr Dar by the shores of Lake Tana. It was a random killing and the only reason he stooped shooting was because he run out of bullets. What makes this crime unique is that it was committed by some one that is trained to protect and serve. At least in most places that is what we think of the armed officers that move around with loaded guns amongst us. I said in most places, our Ethiopia is not such a place.

In Ethiopia the TPLF party’s Federal Police is an instrument of terror. Their motto is shoot first, ask questions later. You will not find a single Ethiopian that would not be engulfed with fear when the Federal Police is mentioned. The force was purposely designed to instill fear. From what I know of the Federal system here in the US the FBI does not involve itself in local matters. The local Police that are answerable to the Mayor or elected official is the first line of response. The State Police is under the elected Governor who is accountable to the citizen. There is a clear line of jurisdiction built into the system.

Meles Zenawi’s Ethiopia is different. The Federal Police force under him is the ultimate arbitrator of justice or injustice in this case. The Different Kililis or Bantustans have no power or authority on this rogue force. No sane Kilil head will challenge the power of the Federal Police. I can safely say that regarding all Killis except the Sovereign State of Tigrai. Abay Woldu would not allow a Kenbata, Oromo, Amhara or Somali Federal Police to roam around in his State with immunity.

When the late dictator copied the Kilil system from Mussolini with upgrades from the South African Bantustan system he made a few improvements of his own. Bahr Dar is the capital city of the Amhara Kilil. What in the world is a Federal Police doing in the streets of Bahr Dar with a loaded is gun is one of the peculiarities of the Ethiopian scene. That practice is one copied from Apartheid system. Why the local Police are not enough to keep the citizens of Bahr Dar safe is not clear at all.

Thus on the evening May 12 a certain Federal Police officer opened fire and killed all he can find in his aim of fire. No one confronted the individual and once he run out of bullets in his high capacity gun he left the area. Things got more interesting after that. First there was a lot of argument regarding the numbers killed. Apparently counting dead bodies lying on the street is not an easy task. Before the blood was dry on the highway Awramba a new and obscure Website here in the US that seems to be on the know felt it was important to label the ethnic origin of the killer as if that will make the heinous act more palatable or clear.

This childish attempt to misinform was followed by the TPLF party in a more bizarre press release that defiantly can only happen in a country where there is no independent press to raise questions and demand answers or by a government that does not have an iota of respect for its citizens.

According to the Ethiopian government the above is the picture of individual that committed the crime. His dead body was fished out of a river. They did not bother to name the river.  A body left in the water for a day or two will show all the symptoms of death by drowning. Our killer shows none of the effects of being in the water dead. His shoes are polished, his uniform is crisp and the blood on his face is not of someone left in water for any length of time. Do you think the rope tied around his feet is how he was dragged out? It is just curious he did not get dirty and with all that blood on his face no fish bothered to nibble. It is a miracle.

The story did not end there. While the Federal Police was displaying his dead body the Kilil administrator was issuing press release regarding the ongoing search to look for the criminal. It is just two versions of the same lie. The newly minted Prime Minter whose force murdered fourteen people did not even bother to go to the scene and console the victims’ families. He choose to send a high sounding message promising further investigation. What is the death of fourteen citizens when you can stay in the palace and play host to some Arab delegation? To add insult to injury several high ranking officers of the Federal Police in full uniform showed up at the funeral location the next day. I can see the whole drama from here with the officers arriving in their four wheel Range Rovers accompanied by zillions of security while descending on the poor folks sitting in a tent trying to console each other.

A week later the Federal Police put out a press release that they have detained ten members of their force for ‘neglecting and failing to act’. Do you mean to tell us there were armed police around while he was shooting randomly and they just watched, or did they know he was intending to do just that and they kept quiet which one is it my dear Workeneh?

No matter how you look at it the whole story is bizarre. Starting with the action of the insane individual to the conflicting press reports by the officials and the reporting by ETV that doesn’t even ask why the criminal’s clothes don’t show any signs of being in the water – it is vintage Woyane drama.

The report by the Diaspora press was something to behold too. We were told the citizens of Bahr Dar were fuming. They were showing signs of anger and were seating ready to let of steam. No adjective was spared to describe the mental and physical anguish of Bahr Darians. Thus I waited to see how this criminal act of an invading force was going to manifest itself by the citizen reacting back. Pictures of Palestinian citizens under the watchful eyes of the Israeli Army burying their dead clad in their beloved flag and defiant in their tone passed thru my head. I remembered the scene from Cairo where the citizens carried the dead bodies of their martyrs shot by the Mubarak’s police during the Arab spring as it flashed vividly in front of my eyes.

Nothing like that happened. Someone once said we Ethiopians have even lost our capacity to be angry. The best explanation that comes to mind is what was said by our Holy Father Abune Melkesedek explaining the silence of his people a while back as ‘Bechelema Gelmecha’. That is what took place in the city of Bahr Dar ‘Bechelema Gelmecha’. It must be very satisfying to the individuals but no one saw it. What is the point is a good question to ask. How is the evil doer going to understand the hurt inflicted on those families and the entire city? Is a simple defiant procession to protest and let the regime know the citizens feeling much to expect? Isn’t there one brave soul in the whole of Bahr Dar that is not afraid to respond in kind?

Well to settle the matter once and for all the Woyane government brought in ‘Special Forces’ unit to Bahr Dar to even control the thought of defiance let alone the act. I still do not understand the presence of all this armed groups in such an idyllic location. Bahr Dar is far from any border and currently there is no one threating the peace and harmony of the city. I just don’t understand why our cities are military camps during a peaceful time. I also don’t understand why we have so many people serving the military while so many of our schools are starving for teachers and books, our hospitals and clinics are poorly stocked and our children and grandparents are fed once a day if lucky. I guess it is all about priorities. The regimes first order is to protect itself from the people and it is perfectly understandable budget allocation favors security over anything else. As for the citizens of Bahr Dar I say to you no one can save you from yourself you just have to figure a way out of the current dilemma of occupation by an outside force of course in collaboration with you present day bandas. It has been done before and I have no reason to think you will not rise up to the challenge. We can echo your scream from afar but there is just no one like you to do the job. Good Luck!