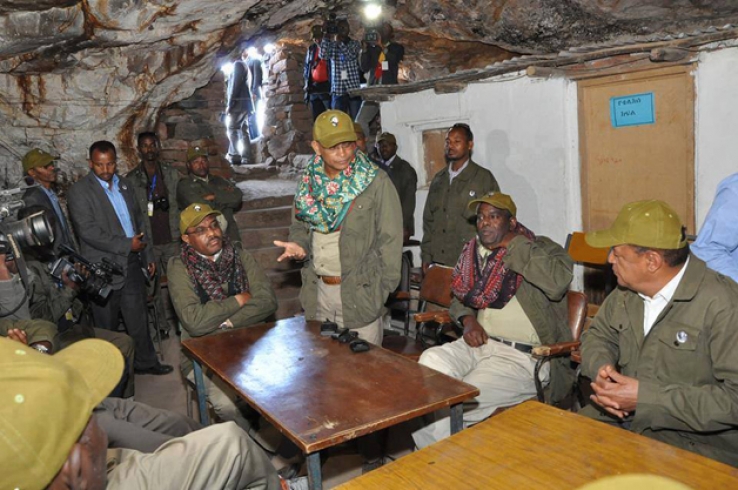 The ¼ Prime Minster of Ethiopia was at it again. Abay and Mesfin have been busy warning us of the consequences of getting rid of Woyane. Debretsion is more concerned about the rift in the military while Tigrai warlord Abay Woldu is swearing Wolkait or death. Aba Dula and Kassu were added to give color to discussion not that any body paid attention. It was quarter PM’s turn and he delivered his colorful speech to Woyane 100% Parliament. As usual it was all theatrics and void of any quotable moment.

He did not fail to demonize any and all Ethiopians that do not agree with TPLF. Quarter PM was channeling Woyane madness and very happy to get the rare pat on the back from his handlers. He emulates his mentor Meles Zenawi in every manner. He has copied the late evil leaders sarcasm, his bullying manner where he attempts tasteless jokes at the expense of others and make statements that are neither verifiable nor true. To have no qualms about lying used to be a Woyane trademark but HMD seems to have acquired that habit too. He is a cheap Chinese copy with all the flaws of the original. Americans will call him Mini Me.

He was speaking on behalf of TPLF since he really does not have any vision we know of or any agenda other than serve TPLF as needed. The only power base he has is the Wolaita community he comes from and that is nothing to write home about. He has been a virtual prisoner since Meles plucked him out of Arba Minch to be used as the ‘minor’ nationality face of Woyane. Here is a transcript from a monologue at his recent public appearance:

‘The point where we disagree is we believe Ethiopian politics have to be Ethiopia’s business but they tell us we generate only 90 percent and 10 percent comes from abroad and they want to meddle. Here is Adwa and all that comes in….We Ethiopians have to do our politics ourselves …you can not mess with us like you do with other African countries, like you hoist a flag and announce the regime has resigned, that would not work in Ethiopia. You cannot control us, we don’t allow outside forces to meddle (play) in our politics. The Ethiopian Orthodox Church that has built so many beautiful churches from contributions because people believed in them if you want political legitimacy you have to make people believe in you, it is not about lack of funding, we will take your ten percent because we need dollars ( laughter) this charities law has destroyed families (corrupt) from getting income, it has cut the hands of those that wanted to involve in our politics. Thus if you go on social media you hear criticism about the stifling effect of the Ethiopian Charities Law, on the other hand if you bring ninety percent from America and get involved locally.

I told you it is typical Meles type bravado void of substance. Quarter PM was focused on demonizing the Diaspora and in a roundabout way speaking of the US and the west. Both targets are what keep his regime standing with one leg. The Diaspora Ethiopian is the number one contributor of needed hard currency and a formidable investor in Woyane ponzi scheme. The US is the one that turns it head not to see the Human Rights violations and also allows the regime to borrow from international institutions knowing it is going to be misappropriated. The US also trains Woyane army and pays for all the so-called ‘peace keeping’ missions. These are the two giants quarter PM was chastising for wanting to be involved in Ethiopia affairs. The individual is clueless in the workings of money and politics. He huffed and puffed about sovereignty and pretended to be a Nationalist while TPLF is selling land to the Indians, Chinese, Saudi and others. He wants to hide behind the flag while Woyane is exporting beef to the Arabs while the people starve. He wants to pretend he controls his destiny while his masters have their palms stretched asking for alms.

Quarter PM also discussed the building of churches and the generosity of the faithful in Ethiopia. Why he confused this with politics is not clear. I guess the logic is if Ethiopian Christians can build all these Churches from contributions then charities (NGO) should not get any funding from outside.  Why the regime receives millions from outsiders to balance its budget and why that is considered legal is not clear.

The Ethiopian people never elected HMD to that high office. He was appointed by the Tigrai ruling group. Thus when he speaks no one pays attention. As far as the people are concerned he is just another cadre temporarily occupying the office by the good will of the Woyane party. The late evil tyrant recruited him like he did with Addisu, Abate, Tamirat, Tefera, Aba Dulla, Junedin and many other feeble minds to serve his purpose because he saw something in them. They all were pliable. They were brought in to show the inclusive nature of TPLF. They were window dressing and the Ethiopian people knew it.

As we speak Woyane is calling the debt in. It is time to pay back for the fame and riches made possible by Meles and company. Muktar Kedir and Aster Mamo are the latest victims. The killings in Oromia are going to be their doing. It is time to bring a puppet, make him confess and humiliate him/her in public to wash the crime away.  The TPLF has done this before. Some like Tamirat and Abate Kisho are thrown in the dungeon while a few are allowed to keep what they stole and made to leave (Junedin, Ali). There are those left to roam the City like a ghost (Tefera, Addisu).

Quarter PM was asked about athlete Feyisa Lilesa and his protest in Rio. Of all the things to be said HMD decided to question the ability of our friend to make such a determination. Ato Feyisa was clear about what he is not happy about in his homeland and used the opportunity to let the world know. He was not focused on some philosophical discourse but said as a matter of fact that he has seen family and friends get killed, disappear or suffer and that is what he is protesting. Quarter PM speculated Ato Feyisa did this because others imposed on him. He is not willing to accept that some people have moral values and would not accept being abused for any price. How could that be, doesn’t everybody have a price is what HMD thought.

Ethiopians are lucky to be able to witness such successive mental meltdowns in the mafia group in a matter of two weeks. We witnessed Cadre Getachew Reda and veteran Woyane birdbrains Abay and Mesfin completely lose it when confronted with Amhara Oromo unity. How could that be so, aren’t they like hay and fire subject to ignition without notice asked Getachew while Abay and Seyoum made their bets on the two fighting it out. HMD was totally disgusted by Feyisa Lilisa’s selfless act. What a wasted of opportunity when he could return as TPLF made hero, receive land, build a hotel and share his riches with Woyane. I am hoping this situation with Feyisa is a teachable moment for HMD. I pray that it opens his eyes and he comes to realize leadership is a heavy responsibility and it has to be earned. A young man like our athlete hero is showing HMD the right way to pay back your debt to society and harvest the goodwill of fellow country people. In the action Ato Feyisa undertook there was no financial gain and it also exposed his family and friends to high danger. That is a definition of a hero. His conscience won over.

Quarter PM is in New York for a UN assembly. I ask the individual to sit in his hotel room and see where the road he is on is leading him. The last five years he has been dealing with Woyane and by now he should know that they have no honor. It is clear association with such criminals does not end well. Is he willing to trade his beliefs and core human values for a few years of fame? Is he willing to drag his family thru mud due to the actions of his associates? There is always a way out. He does not have to go back. He can ask for asylum and undo the evil he has facilitated and sleep peacefully knowing finally he did the right thing. HMD please remember to err is human but forgiveness is divine and the Ethiopian people are the kind that will forgive you if you will come clean and help us find a solution to the problem your associates have caused. We pray your God help you make the right decision.