Author’s Note: This critic has nothing but love for the Tigrayan people; as such the writer doesn’t intend to diminish the Tigrayan people – who are one of Ethiopia’s umbilical cords – for the crimes the TPLF’s butchers committed against Ethiopians over the last forty years. In the author’s view, the TPLF’s elites and their interrogators inhuman acts don’t represent the Tigrayan peopleeven though the elites and their interrogators masquerade as Tigrayan-pride; instead they are a disgrace to the Tigrayan people. Furthermore, the writer isn’t trying to imply that Tigrayans are a bizarre ethnic group by highlighting the TPLF’s interrogators’ kinky behavior such as “peeing on/near/in front of” detainees. This article is dedicated to the TPLF’s torture victims; its aim is to amplify the author’s stance against the TPLF’s Executive Committee members’ effort to obstruct justice, including the sheltering of Getachew Assefa, the butcher of Ethiopians.

A YouTube channel called Kenya Specific (KS) read to its audience my(the writer’s) article titled “The TPLF is Harboring Its Torture Kingpin, Getachew Assefa”. Follow the hyperlink to listento KS, which reads news “from Kenya and the world”, in an unconventional way. YouTube said KS has been viewed by more than 2.5 million viewers since it created its channel.

Basing the commentator’s experiences of the Derg and the TPLF’s regimes’ state sponsored reigns of terror, the Derg’s regime’s brutality is more like junior varsity level as compared to the TPLF’s varsity level. The TPLF’s reign of terror is far worse than the Derg’s Red Terror; for example, unlike the Derg, the TPLF:

For instance,the TPLF’s security head Getachew Assefa is notorious for torturing his detainees in the most brutal techniques: he ripped off detainees’ fingernails and also tortured wounds with pliers. He tortured prisoners in their most extreme sensitive private areas. For example, he tortured females’ vulva: the labia minora and majora, opening of the urethra, clitoris and vagina with pliers. He also tormented males’: penis, scrotum and testicles with various objects, including pliers and destroyed prisoners’ manhood related to their sexual power. 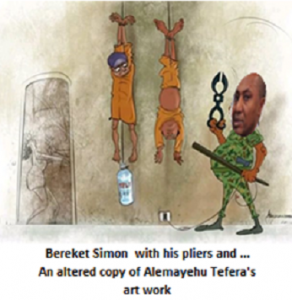 Furthermore, one of Assefa’s torture victims said that his interrogators laid him flat on his back on an interrogation room’s floor and tied him up so that he couldn’t move. And his Tigrayan speaking naked female interrogator told him that she sees the Amhara people as if they were a latrine and then she proceeded to soak/shower him with herurine by peeing on/near him. He also said that she gave him a massage while she interrogated him. One must wonder whether she urinated on/near the detainees for a sexual pleasure called a golden shower.

Lastly, most people are aware of that in life, focusing on the future is much better than focusing on the past. And most people would agree that taking revenge against someone to fix past atrocities would make the present outrages much worse than the past. Moreover, most people would also concur that it is vital not to let the TPLF’s elites walk freely after they obstructed and delayed justice by sheltering their butchers, Getachew Assefa and his accomplices. Even though the TPLF’s Executive Committee (EC) members aresubject to the law, the Ethiopian government has yet to file a criminal charge against them, namely:

Note:from bbc.com/Amharic, the writer obtained a copy of Alemayehu Tefera’s art work. To make it more fit withthe article’s message, the author altered the art work with Bereket Simon’s image obtained from Google Images. Among Ethiopians, Simon isdespised for hismalice. For instance, he masquerades as Amhara and Amhara-pride though he is an Eritrean. Hechampioned hate crimes against the Amhara people for more than forty years. He waged misinformation and disinformation campaigns against Ethiopiansfor decades and enabled Getachew Assefa and his interrogators to arrest and to torment the Amhara and Oromo people.