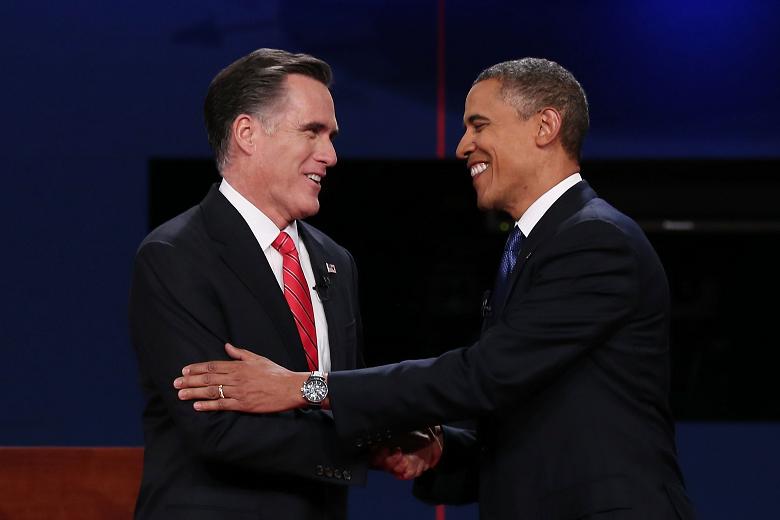 President Obama and his challenger Mitt Romney had their first debate this evening. Watching this debate for the highest office in the land was a learning moment. This is not the first debate I have viewed or the first election I am experiencing. But no matter what, for an election starved Ethiopian like me every time it happens it is a like being hit by a lightning bolt experience. It literally gives me a jolt.

It is not really difficult to figure out why this is so. No one has asked for my consent to be my leader. Furthermore those that have assumed the position have always abused me to no end. When I see candidates presenting their best side and begging for votes I literally find myself on the verge of mind melt.  This evening was no different. I stayed tuned, I worried for my candidate, I was elated at times fretted often and sweated a lot. I watched the big event with my American friends. That by itself was most revealing on how I interpret reality and act on it.

I am an Ethiopian. I look at things black and white. Who cares about grey is my motto. The debate was an insight into my soul. Here I was with an elevated heart beat, a hyper ventilating state of being and I was supposed to sit cool and collected. Being detached and above it all was the norm. How in the world did I find myself in this company was my first question.

What I needed was some passion here. I wanted someone to push me further on this rollercoaster of emotion. I longed for an Ethiopian beside me. I wanted Obama to jab, push and humiliate Romney. What is with this idea of mentioning where you agree when the thing to do was point out the negatives of the other dude?  I want my candidate to come our firing and mock his opponent. I wanted Obama to be aggressive. I wanted him to be dismissive and cute.

That is what I know. That is what I am used to. My leaders are supposed to be dismissive and and above it all. They are all knowing, expert in every field, feared and uncompromising. My last leader was like that. He will never bring himself down to debate with mere mortals about the art of leadership. You send your minions for a task like that.

Do you remember once upon a time we had a debate in good old Ethiopia? It was not that long ago. Don’t tell me you forgot, it has only been seven years. It was 2005 to be precise. That event will go down in history as the golden year of elections in Ethiopia. Woyane thought they were ready for prime time. After lengthy and silly negotiations debates were allowed. Our ‘new leader from behind’ Ato Berket was the negotiator on behalf of the clueless regime. He brought out so many do’s and don’ts to get an advantage but the opposition agreed to all his demands. Kinijit was willing to humor Woyane because they knew they were smarter and were sure that they were selling a better product to the Ethiopian people. They just wanted that TV time to talk directly to the Ethiopian people.

Shall we say that history will judge Woyane to have been humiliated beyond repair?  For the first time our people saw their leaders without their clothes. It was an ugly sight. Woyane sent their best and Kinijit exposed them for what they are to the Ethiopian public, a bunch of illiterate idiots that cannot finish an idea in a coherent manner. I remember the then Foreign Minster with his shrill voice trying to explain the loss of Assab.  To see that he was considered crème de la crème, one of Woyane top guns was a reality check. All Dr. Yacob could do was stare at him with amusement and watch him try to explain the impossible.

I also remember the dead tyrant panicking as usual. He can not show up at the debates due to the fact that he was the ‘leader’ and it was beneath him. He knew that he will be exposed for the empty suit he was if forced to play by the same rules as others. The only alternative was to bring the camera to the palace so he can shine all by himself. A candle inside a barrel (ye gan mebrat) at its best.

The reason Obama/Romney debate got me twisted out of shape was due to my unfamiliarity with this concept of being shown respect as a citizen. As far back as I can remember in my country no one has come to power by the will of the people. Anybody that assumes leadership without the consent of the people is not accountable to the public. Where I came from leaders don’t compete to get elected, they take it the old fashioned way, by force or a very underhanded manner.

In Ethiopia we had a change of leadership a few weeks back. It was not done by election. It was all back room dealings and we were told someone emerged as the leader. Thus the non- elected individuals somehow decided to appoint the new guy as the leader. There was no debate. There was no competition and we don’t even know who else was running for the position.

Now you know why this debate in North America was a little disorienting to my Ethiopian brain. When you consider the new guy who was presented to us insults my intelligence by claiming he was going to continue following the bankrupt polices of his predecessor you don’t fault me for assuming the fetal position and crawling back into bed. If only there was a debate I wouldn’t be in this hopeless mood.

President Obama and Mr. Romney were most respectful of their fellow citizens. They did not mock or put anybody down. They were uplifting and went out of their way to praise their people’s determination to forge ahead when faced with dire economic problem. They acknowledged that they needed everyone’s help to bring back peace and prosperity.

This I found to be in stark contrast to how things are done in my home land. The leader tells our people but does not bother to listen. The leader is not interested in being respected and loved but cultivates being feared. The leader makes sure that he is not one of the people but better and above them all. The last leader was never seen in public mixing with ordinary people but always surrounded by his bodyguards and with pre-selected fans. The leader leaves in a palace with more comfort than his people and travels in convoys with streets closed and people told to stay inside.

Our new leader was in New York to attend the UN opening ceremony. Don’t ask me why a poor country will spend thousands of dollars to transport him and his entourage to make a speech no one will care to listen to. The amount of money spent for this silly purpose is not supposed to be the concern of the citizen. That is why the leader did not bother to sit with his fellow citizens in exile and discuss common issues and encourage their participation in helping the country. When you consider the Ethiopian Diaspora is such a rich and important resource that can be harvested to move our nation in a new direction like the way it was done by India, Singapore, China and others our leaders do not see that. They would rather pick our pockets for spare change to build condominiums, bars and hotels.

Accountability is the hallmark of a successful system. Without accountability, checks and balances it is doubtful a system will work in a healthy manner. That is the reason our country is always on the verge of crisis and perpetually holding its hands out for alms. The leaders we produce have no respect for us and do not feel they have to answer or explain their policies. They come out of our midst but as soon as they assume that office they start to believe they are God’s gift to us. We elevate them so high no wonder they lose all semblance of respect to those they are empowered to care. The fault goes both ways. As they say you reap what you sow. We really can’t force the leader to change but the least we can do is change ourselves. The leader will follow our footsteps and change his ways.