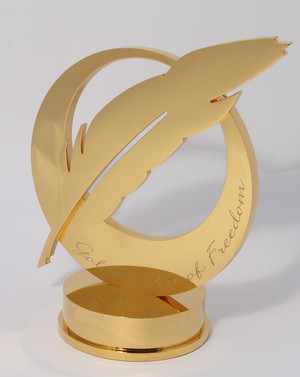 Eskinder Nega, an Ethiopian publisher, journalist and blogger who is serving an 18-year jail sentence under anti-terror legislation, has been awarded the 2014 Golden Pen of Freedom, the annual press freedom prize of the World Association of Newspapers and News Publishers (WAN-IFRA).

Mr Nega was arrested on September 14, 2011 after publishing an article criticising his government’s use of the 2009 Anti-Terror Proclamation to jail and silence critics, including Ethiopian actor and activist Debebe Eshetu.  He was sentenced on 23 January 2012 and denounced as belonging to a terrorist organisation.

In making the award, the WAN-IFRA Board sent a message to the Ethiopian government that misusing anti-terror legislation to jail journalists and those critical of his government is unwarranted and against international protocols, including the Vienna Declaration on Terrorism, Media and the Law.

“This award recognises the courage of Eskinder Nega to speak out despite the risks that saw him jailed under his country’s draconian and overly broad anti-terror laws,” said WAN-IFRA President Tomas Brunegård, speaking on behalf of the Board.

“We call on the Ethiopian government to release Eskinder Nega and all journalists convicted under the sedition provisions, including Solomon Kebede, Wubset Taye, Reyot Alemu, and Yusuf Getachew”, said Mr Brunegård, who recently visited Ethiopia as part of an international mission that found that the country’s publishers and journalists practice journalism in a climate of fear.

The Golden Pen of Freedom is an annual award made by WAN-IFRA since 1961 to recognise the outstanding action, in writing or deed, of an individual, a group or an institution in the cause of press freedom. More on the Golden Pen can be found at http://www.wan-ifra.org/node/31099

The award will be presented on 9 June during the opening ceremonies of the World Newspaper Congress, World Editors Forum and World Advertising Forum, the global summit meetings of the world’s press, to be held in Torino, Italy.

In an opinion piece published in the New York Times, Mr Nega said of his imprisonment: “I’ve never conspired to overthrow the government; all I did was report on the Arab Spring and suggest that something similar might happen in Ethiopia if the authoritarian regime didn’t reform… I also dared to question the government’s ludicrous claim that jailed journalists were terrorists.”

WAN-IFRA has been vocal in their opposition to Ethiopia’s misuse of anti-terror legislation, writing to late Prime Minister H.E. Meles Zenawi in 2012 requesting the immediate release of Mr Nega and most recently demanding his release, along with four other imprisoned journalists, in a joint international press freedom mission to Ethiopia, conducted with the International Press Institute. The full report from the international press freedom mission can be found at http://www.wan-ifra.org/node/97172

Mr Nega opened his first newspaper, Ethiopis, in 1993, which was soon shut down by authorities due to its critical reporting. He then, along with his wife Serkalem Fasil, managed Serkalem Publishing House, responsible for newspapers such as Asqual, Satenaw and Menelik, all of which are currently banned in Ethiopia.  He has also had his journalist’s licence revoked since 2005, but continued to publish articles despite the ban.

Mr Nega is no stranger to being imprisoned due to his writings. He was detained at least seven times under Prime Minister Meles Zenawi.  This included a 17-month jail sentence, along with his wife, on treason charges for their critical reporting on the Meles government’s violent response to peaceful protests that followed the disputed 2005 elections.

WAN-IFRA, based in Paris, France, and Darmstadt, Germany, with subsidiaries in Singapore and India, is the global organisation of the world’s newspapers and news publishers. It represents more than 18,000 publications, 15,000 online sites and over 3,000 companies in more than 120 countries. Its core mission is to defend and promote press freedom, quality journalism and editorial integrity and the development of prosperous businesses.