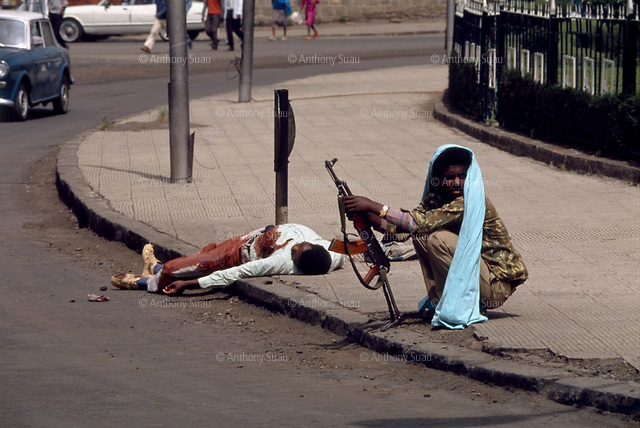 According to ESAT the FBI has foiled an attempt by the Ethiopian government to assassinate Ato Abebe Gelaw. Goosh Abera and his accomplices are under custody. Please note here I said the Ethiopian government since there seems to be no thin line between the TPLF party and the government. Why am I not surprised? I am not surprised because for the TPLF violence is sanctioned by the party leaders as a legitimate tool to achieve political, economic and military dominance.

The following weeks as we look closely at Goosh Abera and his criminal friends and the FBI presents a psychological profile of the alleged conspirators we are sure to find out certain telltale signs about TPLF and their bizarre psychopathic behavior. Individuals like Goosh are most probably equipped with basic rudimentary education if any and survive by their wit and ethnic fueled bravado. In Ethiopia they are known for carrying weapons conspicuously, brandishing them at will and revealing in their thuggish behavior. They are the kind that administers summary judgment on street corners, bars and clubs.

How was TPLF Chairman, the recently departed Ethiopian Prime Minister Meles Zenawi able to achieve this goal in Ethiopia? The simple truth is by using violence to silence, intimidate, and eliminate his and the party’s actual or perceived enemies using any means necessary.  You do not need to be a Sherlock Holmes to detect this pungent smell of gun powder around most Woyanes.

Mengistu Hailemariam prepared the perfect ground for TPLF to flourish. He has already disarmed the population, delegitimized the family system and used the lowest denominators to be in charge of the Kebeles. TPLF inherited a demoralized, confused and tired population to mold in its own image.

The first target of this terrorist organization was the educated citizen. The University was stripped of its most experienced and independent thinkers. By ’94 the University was a former ghost of itself. The political system was dealt in a harsh way. Professor Asrat was murdered in the most inhumane way possible. Teachers President Assefa Maru was shot against a wall execution style. Masses of independent publication owners, editors and reporters were brutally beaten, murdered, bankrupted, intimidated, exiled or killed even in exile. Bank employees were fired in masse, telecommunication workers were discarded teachers and their unions were digested even Chamber of Commerce was not immune from TPLF take over. One thread common to all is that none of them were acquired peacefully. Violence was the main calling card of the TPLF.

Every opportunity he got the sick dictator used to trash our country and our history and every opportunity they got his security department used to bully, intimidate and made to cower with fear. My dear fellow citizens, you know there is nothing new in what I am telling you. Some have witnessed it, plenty have experienced it and a vast majority would try not to think about it. The shame is unbearable.

One thing about TPLF is it is not a behind the curtain type of organization. It practically advertises every hit and all illegal acts. They use their criminal action to send a clear message to the citizen. That is why they insist that all are aware and versed on their mode of operation. They use their Television news, their newspapers and radio to send warning messages before they take action. When the unthinkable happens some are heard to say ‘he/she was warned but refused to listen-they deserve it!”  You see the victim assumes the blame.

They have been systematically killing any and all emerging Ethiopians. They have goon squads that go around intimidating anybody they perceive to be a challenge. They use beating and flogging opponents to shame them in front of family, friends and a whole village. They use blackmail as a tool. They use the law to break the law. Meles used to amend the Constitution in a weekend. Even the Constitution is not worth any respect. Once you trash the Constitution what is on your way?

That is what the FBI s telling us. Their dirty deeds have arrived in America. Under Meles they were content in infiltrating our organizations such as Political Party support groups, Eders, Churches, Sport organization and disrupting from the inside. There is no Organization in North America that has not been a victim of TPLF insider disruption. They are crafty, relentless and completely understand our frame of mind. They exploit our ignorance, selfishness and greed to keep us in a daze.

The new TPLF leaders are a little bit reckless. I understand that too. It comes out of desperation. The group is under tremendous pressure. The late dictator I am afraid was a very selfish person. The sun revolved around him. When he left the light went dim. I do not think any social or military organization can take credit for the current upheaval. In my humble opinion the stink is coming from inside. I agree things are getting ripe on the outside and that could intensify the pressure inside the TPLF bowl. I am afraid the last CEO did not really care to what came after him. He was too busy surviving from day to day in this shark infested pond that he did not have the time and luxury to bother with outcome. He left an army with too many generals.  Here in America there is a saying ‘all chiefs and no Indians.’ Debretsion, Bereket, Sebhat, Gebru, Abbay and a bunch of tin pot Generals are on their own trying to carve the biggest pie for themselves.

This desperate act of attempt to assassinate Ato Abebe here in the US is the work of a mad man. If the group was trying to send a message about the long arm of TPLF it is a very stupid and crazy gesture. We have been complaining about their disruptive activities in our midst but this mission of trying to kill is a little concerning. There is no question the FBI will get to the bottom of this incident. It should be treated as act of terrorism by a government and investigated to the full extent of the law and let the chips fall where they may.

I am sure the alleged conspirator will name names and tell us who gave the order for such criminal act. I doubt one individual will take it upon himself to take such mission. The Ethiopian Government under Dictator Meles routinely used to kill, rough up and intimidate its opponents in the African countries they are exiled to. The new guys are a little daring. Prime Minister Debretsion and security chief Workeneh Gebehu Should be interviewed about the work of their agents and made to take responsibility for their actions. We hope the US government will take the necessary action of baring all Ethiopian Government officials and family members from entering the country before everything is known about this conspiracy to commit crime in the US. We should demand the US government protect us from the monsters they have been coddling.

This definitely is not their first time committing crime here in the US. They have been using every legal and illegal means to harass, bankrupt and shut down Ethiopian Review Web site. They have employed what is known as denial of service attacks (DDoS Attack) to block ER and various Web sites, they have hired attorneys to intimidate ER publisher and are present in every of our Churches sawing dissent and negativity.

As Ethiopians in exile we should take the actions of these criminals seriously. It is true there is no criminal without the victim. Sometimes it is unfortunate things happen but you really can’t leave your door open and cry about being robbed do you? It is time we accept responsibility. The Ethiopian people that are facing the brunt of TPLF abuse should wake up and face their coward enemies. By now it should be clear silence is not the answer. The one year anniversary by our Muslim citizens is clear indication the regime does not listen to reason. The steadfastness of our Muslim brethren should be applauded and emulated by the rest of us. The call by our Orthodox church in exile for every one of us to safeguard our religion and our country is a timely reminder.

The fact that we have muscle now is a very empowering feeling. The cooperation between Ginbot7, Afar Front, anti Woyane activists in Tigrai, OLF, Patriotic Front and the formation of Ginbo7 Forces is the right direction considering the nature of TPLF. As I said before leveling the playing field is called for. That is one small step for our Fronts and one giant step for Ethiopia.

As for the Diaspora it is time we stop enriching the coffers of the evil regime. Any kind of involvement in their Ponzi scheme adds one day more to their life. As there is no little pregnancy there is no such thing as a little investment. It has to be a clean and complete break. This Abesha way of qualifying our illegal act is not good for our future. Your selfish action is hurting us and we ask you stop it. It is like MLK said ‘In the end, we will remember not the words of our enemies, but the silence of our friends.’  It is something to think about.

We feel the pain and hurt of our friend Abebe and his family. He has never threatened those that have hounded him and his family from his beloved homeland. His only weapon is his pen and pencil and the power of reason to resolve contradictions. Exiling him was not enough. Now they want to kill him in cold blood. That is the only language they speak. They have killed so many but they are unable to understand their violence has not resolved any of the outstanding issues. Don’t they see it? Don’t they know there are a lot more Abebebes as there were plenty of Asrats, Assefas, Eskindirs, Reyots? When is this madness going to stop? When is our country going to be a citadel of peace and harmony instead of a poster child for famine and civil war?

You know what no one gives you your freedom. You have to snatch it from those that want to make you their slave. No oppressor has ever said enough, I am going to leave you alone here go in peace. No, every oppressor faced by human kind was compelled to relinquish power by force. Not reason but force. The French revolution, the American revolution, the Russian revolution, the Chinese revolution, the South African revolution are all examples of the citizens taking matters into his hands and forcing the oppressor to step aside. Woyane dogs are not going to wake up one morning and pack and leave. You and I have to push them out. That is the only proven way. Anything else invites more abuse.

(Photo: A demonstrator opposing the new government was shot and left in the street for public display. He is guarded by a member for the new military rebels (TPLF). Photo taken by Anthony Suau)