The article “Undoing the Unproductive Cultural Reforms TPLF Carried Out” explained how the ruling party scrupulously reconfigured our culture making it susceptible to its divisive and self-serving agendas. The article’s call to action was raising and supporting leaders who not only lead us undoing these unproductive cultural reforms but also play a proactive role in leading us pass through other important cultural reforms to transform our country. However, it occurred to me that transforming a culture isn’t an easy task. It entails some ‘beatings’ from the inhabitants of the culture. Culture is powerful and whoever intends to change it must first know the consequences. This article is aimed at informing our leaders, who may dare to challenge the status quo that has kept us at bay, the power of culture.

I’ve studied the dominant cultures in the world as part of my job as a leadership workshop facilitator on topics such as diversity, change management, and as I consult organizations in configuring (reconfiguring) their corporate culture and aligning their people and processes along side their corporate shared values. These chances gave me the opportunity to realize that this is a universal reality, not unique to us Ethiopians alone. Every culture (whether societal or corporate) has ‘worshipers’- status quo maintainers. The latter resist change, and may even sabotage it unless the leader gains buy-ins from resisters and also fence sitters. Remember this: Many people may not even know that the way they think, the pattern of their behaviors, the way they decide, and act are the results of their cultural orientation. These things operate at deeper (subconscious) level without much awareness from our conscious side of the brain. That makes it harder to question, let alone to attempt to reform the status quo. Many people take your positive intent to bring change personal, and therefore, they don’t let go the status quo without a fight.

That is why this tremendous task of reforming a culture requires bold and courageous leaders since they definitely face so many hurdles including persecution from some corners. The reason being the majority in a given culture defends the status quo including those counterproductive traditions, myths, taboos, and sayings in their culture without questioning and knowing why they were installed in the first place. Many inhabitants of a given culture are blind loyal and don’t think twice to revert to violence (at least verbally) when the ‘norms’ are challenged. Here is a popular psychological experiment carried out by Harry Harlow to illustrate the formation and maintenance of a culture. 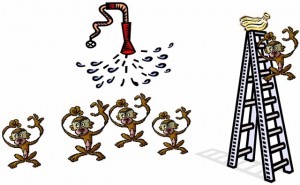 The experiment was conducted in a lab, which was configured to spray cold ice water throughout the room when the ladder in the middle is touched. There were five monkeys in this experiment, and bananas on top of the ladder. The starved monkeys ran toward the ladder to reach the bananas as soon as they entered the lab. When they touched the ladder, all of them were sprayed with brutal cold ice water. The water was so cold that they immediately descended without grabbing the bananas. After a couple of trials with the same brutal cold ice water spray on all of the monkeys, they developed ‘group thinking’ and stopped trying so as to avoid the cruel cold-water spray. Soon after, the spray was discontinued. The monkeys would have enjoyed the bananas without being sprayed if they changed their mind and attempted to climb the ladder again. They didn’t. After awhile, one of the original monkeys was substituted with a new monkey. The latter didn’t have any clue about what was going on. When this newcomer ran toward the ladder to grab a banana, the four original monkeys attacked it thinking that the water spray treatment was still in place. The beating continued even if all of the original monkeys, which witnessed the cold-water spray firsthand, were substituted- one by one- with new ones. What these monkeys that defended the bananas knew was that they had been beaten the first time when they tried to do the same even if they didn’t know why. Afterward, they also watched other new comers were beaten. Soon after, they joined the ‘group thinking’ and started to defend the bananas from newcomers even if they didn’t have any clue why this beating started in the first place.

I’m sharing this story not to scare you, if you’re a change agent genuinely attempting to bring lasting change in our country. However, you should know that you couldn’t succeed in employing a lasting and impactful transformation without conducting a cultural transformation. Whatsoever great and positive name you may give your change agendas, and whatever extraordinary outcomes you may promise to our people, the majority’s default response is an emphatic NO! Your innocent, genuine, and passionate drive to change things around for good may be taken as disrespect to their ‘god’- their culture, and as a result, you spend your precious time and resources in fighting resistances. The moral of this story is that people are blind loyal to their culture and they put up a fight to prevent change including those counterproductive cultural values that they were unaware why they were put in the first place. Unfortunately, many of our leaders are also victims. Most of them may not join the act and ‘beat’ others but they are afraid to be beaten, and therefore, they refrain from challenging the status quo.

One of the things that used to frustrate me when I was active in the opposition camp from 2002 to 2006 was that some key leaders of opposition parties thought that they could just remove the ruling party armed to the teeth with weapons, and loads of money by just giving media interviews and agitating people by telling how bad the ruling party was. TPLF used the weakness. Rather than presenting an alternative transformational plan that outlines how they intended to transform our country better than TPLF, they invested the majority of their time and resources ‘opposing’ TPLF’s plan. The bylaws and programs of some of the parties that I got a chance to read including my own party were copy and pastes from somewhere. Even today, I still marvel whether we have opposition parties that have more than promises. Do they have, let’s say, 10 or 20 years developmental transformational plan that outlines on how they deliver their promises? Even if there’re some, I still wonder whether these transformational plans are bold enough to demonstrate on how to transform our culture by challenging those cultural values that have prevented us from defeating dictatorship, poverty, and backwardness…

But having a transformational plan isn’t enough. I’m familiar with the ruling party’s transformational development plan, and the model they opted to ‘transform’ the country. TPLF announced that it chose the developmental state model after the success of the Asian Tigers, the newly industrialized nations. Yes, in the late 20th C, some East Asian countries adopted state-led macroeconomics to transform their countries. What we have in today’s Ethiopia, however, isn’t a state-owned macroeconomic system. What we’ve is, rather, a few elite politicians, mainly from one ethnic group, controlling every aspect of life in Ethiopia- the economy, security, military, diplomacy, and so on. The macroeconomic system in Ethiopia has been rigged and cannot respond to the miracles the Asian Tigers experienced. While having such a gross favoritism in place, it’s hard to create a shared national vision. People would have tolerated the temporary state-owned command economy, and lack of affluent democratic institutions if they’d shared the national vision. While there is an apparent favoritism (not even based on political ideologies, but rather, based on ethnic affiliation), there is no way that TPLF could lead the country out of poverty and beat backwardness in their lifetime, let alone in 5 – 10 years.

I’ve already shared with you, in one of my previous articles, the transformation of one of the four Asian Tigers, South Korea. Without shared vision, the leadership of South Korean couldn’t have mobilized the populace and transformed their country. As I clearly showed in that article, South Korean leaders reconfigured their culture. They trimmed those values that were counterproductive and added some values that in turn empowered them to advance their transformational plan. What is fun is that, TPLF’s leadership is busy doing many things (on top of favoritism) that sabotage national transformation, and some how, they hope to duplicate the success of Asian Tigers 🙂 Here is just one additional reason why they couldn’t transform the country, state-sponsored corruption. In the presence of massive corruption, no government in history ever succeeded in transforming its country.

Then, you may ask, what is the alternative? Our community leaders should begin the transformation, first in their personal lives, and then within their own organizations (groups, parties, businesses, churches, etc.) It’s possible. Other countries attained cultural reform and transformed their countries from poverty to prosperity, from dictatorship to democracy, from backwardness to civilization, from lawlessness to a just society, and so on. We too, we can! Yes, since the ruling party doesn’t support the kind of transformation we’re talking about here, the road to achieve such a transformation is going to take longer. Regardless, change agents should begin the journey small scale and wherever you are. You shouldn’t wait until you take governing power. As a change agent, you don’t need to convince the whole country about your change schemes. If you could sway enough people to carryout the cultural reform by increasing the self-awareness of your people (first, your followers and fans), the change agendas you put in place may get implemented with relative ease. Make sure not to appear dismissive. Recognize those golden cultural aspects of our country and demonstrate your commitment to uphold and respect them. All cultures including ours have many golden attributes. Our culture has great attributes we must maintain by all means. You should identify those cultural attributes that have been hindering us from progressing in the right direction. There’re also some values in our culture that are missing that could have empowered us to become a prosperous, harmonious, and stable nation. What is more? You can’t just implement large-scale cultural change without having a plan, and also adopting appropriate models, and approaches that worked somewhere. You shouldn’t copy and paste. You could modify and customize them to fit our situation. By all means, don’t reinvent the wheel.

In conclusion, every culture has some rooms to be reformed, and our culture is not exceptional. Civilization comes through continuous cultural reforms and we should go for Cultural Revolution if our desire is to transform our country and overcome those centuries old challenges that prevented us from advancing. Many of the socio-economic and political issues that we want to address cannot be fixed without the necessary corresponding cultural reforms. That is why, so far, one government replaces another but the conditions we desperately want to change are not changing. The sensational singer Teddy Afro in his classic song entitled “Yasteseryal” beautifully portrayed the paradox: “Gulecha Bilewawet, Wet Ayatafetm”. He said in that song, among other things, what we have been experiencing is “The reign of a new king without any meaningful change.” This trend must change now. ‘If not now, when?’ This generation must reverse this trend. If not this generation which one? This task shouldn’t be left for our leaders alone. You should also play your role too. ‘If not you, who?’ In my upcoming articles, I’ll select a few cultural attributes we need to change, just to initiate conversation and put forward some pointers you may consider in your effort to play your share in transforming our community. Stay Tuned!