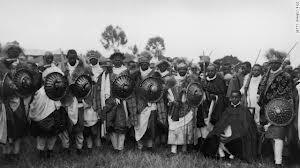 In my point of view the history of Ethiopia, colonialism and fighting for freedom and unity have long relation in the nation’s history .Literal definition of colonialism is exploitation by a stronger country of weaker one or the use of the weaker country’s resources to strengthen and enrich the stronger country. In addition to this, policy and practice of a power in extending control over weaker peoples or areas is also categorized as colonialism.

I just wanted to mention some of these leaders to elaborate the aspect.

Ethiopia was reunified in 1855 by Tewodros II, It was the beginning of Ethiopia’s modern history. As great leader of Ethiopia he among with heroes of his times was able to defended the country from an Egyptian invasion in 1874.

A more rapid modernization took place under Menelik II. Under Menelik II Ethiopia defeated Italian invasion in 1896 and came to be recognized as a legitimate state by European powers.

This and many other leaders of our own has played their role as a great leader .However, in contrary to these leaders, EPRDF or TPLF is implementing controlling mechanism of the country by means of internal colonialism.

Tigray Peoples Liberation Front (TPLF)/ The Ethiopian People’s Revolutionary Democratic Front The current government of Ethiopia (EPRDF) come to power in 1991 G.C. Since,  they came to power start destabilize the country by implementing internal colonialism and  dividing the people by their ethnical group, making the people enemy to one another.

Internal colonialism is a notion of structural political and economic inequalities between regions within a nation state and clearly creates uneven effects of economic development on a regional basis known as “uneven development”, and exploitation of minority groups within a wider society. The government is implementing this idea by controlling the following and other aspects to succeed on the matter.

The first one is by controlling the rule of low. As it is clearly stated in our constitution the low is the superior and everyone under the low is equal. However, the exact opposite is what is implemented in our country. There is absolutely no rule of law since EPRDF came to power 24 years back.

In addition to this, in our constitution and many international laws democratic government have three parts each with its own clear responsibility Executive Branch: acting as chief law enforcement , Legislative Branch: make the laws, Judicial Branch: Headed by the Supreme Court. Its powers include interpreting the Constitution, reviewing laws, and deciding cases involving states’ rights.

These three groups are responsible for democratic situation of one country and provide check and balance in the system. Even though, this roles and responsible parts are clearly stated in the constitution, the actual scenario is far more different. The low maker the low enforcer and the low interpreter is one and the same which is EPRDF(TPLF).

The second one is by controlling freedom of Political Opposition parties. Major breaking event in peaceful political opposition took place in 2005 election. It was clear that people of Ethiopia were united and were ready for change. However, the action EPRDF took resulted to a total of 199 people (193 civilians and six policemen) and 763 were injured, and showed that EPRDF is not willing to negotiate in democratically. Since  2005  election  all  political  opposition  are  not  free  to exercise  . Leaders and supporter of opposition political parties are facing arbitrary arrest torture and ill treatment from time to time.

In addition to this the government also controls Freedom of speech. To put it in simple words According to Human Rights Watch 2013 report Ethiopia is the second country in Africa in terms of the number of jailed journalist.  According to amnesty international annual report in 2013 about Ethiopia it stated the state stifled freedom of expression, severely restricting the activities of the independent media, political opposition parties and human rights organizations. Journalist,  activist  and political leaders who  criticize the government are sent to jail with allegation of being terrorist like Ekender nega , Reyot Alemu,Yusuf Getachew Andualem Arrage and many more.

The government is also controlling freedom of each religion, religious places including their leader .In our constitution it clearly states that government and religion are separated and one could not interfere on the other. However, It reached to a point where people couldn’t practice there religion freely and a lot of religious leaders are dying and are in prison till this day, religious monasteries are being given to private investors while their leaders are forced to leave, we are seeing election of religious leaders taking place in woredas and kebele level .

In spite all the government is practicing Land Grabbing and Vigilization. TPLF has already gave Millions of acres of Ethiopia’s most fertile lands to foreign investors, often in long-term leases. Peoples living for years are forcedly evicted to free up their land and resettle where they could not access adequate food , water and medical care. Peoples are being forced to become dependent on aid handouts having lost their land and their ability to produce their own food. The government has already moved 200,000 households into 388 resettlement centers.

It seems like the government has already prepared a place for those who passes all the above limits which is called Maekelawi among the other prisons. On report of Land info in 2013 about Ethiopia prison state that the exact number of prisons is unknown, but there are an estimated 120 federal and regional prisons. In addition to this, there are prisons and detention centers connected to police stations and on the woreda and kebele administrative levels. In 2010 it was estimated that 86,000 were imprisoned, but the figure is very uncertain prisoners facing serious abuse and intimidation. Being whipped with wires and electrical cords and threats of being injected with HIV-infected blood are some of the methods used.

These are some of the acts I mentioned here but there are more actions that proofs that Ethiopia was and still is under internal colonialism for the past 24 years by TPLF. As our previous father thought us we should be free of colony and for that we should unit ourselves.  There are obviously two options to end this power once and for all. The first one is Peaceful opposition, however as history thought as in 2005 election and the act of TPLF today this is not the best choice.

The other option is to overthrow this regime by armed force. I believe we  must  use  all  possible  means  of struggles  including  armed  forces this is the way the regime could be defeated and regain the previous name of Ethiopia. There for as responsible citizens we should all units our selves to support every opposition parties and armed forces which believe in one Ethiopia and freedom of its people.  Otherwise, only shame will be left for the next generation to be referred as a history!!!

The writer can be reached at (lomita.b.g@gmail.com)