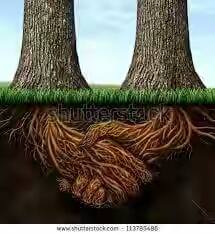 The era of divide and conquer – as we have known it in the last more than quarter of a century, is over. Ethiopians, from various corners, finally figured out who the culprit is. Dividing Ethiopians, especially the two dominant ethnic groups, to stay in power by TPLF is over. The writing is on the wall.

In the past couple of days, social media has been swamped with an interesting graphics- two giant trees standing side by side majestically. I’ve also seen some magnificent versions of this graphics where the two trees shake hands using their long roots. Very creative! Unless I’m mistaken, the origin of this social media explosion is Jawar Mohammed’s recent article entitled “Oromo and Amahara- Two Trees!”

Jawar metaphorical explained the historic and inseparable relationship of the two people. The article was concise and to the point. Using some selective words, Jawar employed his articulation power to send a shocking wave of a timely message that resonated to multitudes of Ethiopians from diverse ethnic groups. The latter in turn responded positively. They read, liked, and shared it…

Using a few paragraphs, Jawar communicated a time-tested truth about who we are as a society. We Ethiopians are intermingled and we’ve a common destiny. What unites us is greater than what divides us. TPLF succeeded to create dissensions and resentments among our diverse people and it worked for a while. Nonetheless,since TPLF’s scripted hate propagandas are fabricated tales, they couldn’t stand the test of time. It has begun crumbling, especially in the past couple of years. Ethiopians from diverse Ethnic groups around the country kept protesting, revolting in one voice- by putting aside their differences- and by saying NO to the divisive schemes of TPLF.

These kinds of gestures from leaders like Jawar will definitely bring our people closer, terrorize TPLF, and shorten the days it take to secure our freedom. Words have power, especially when they are words of leaders. As we have seen it again and again, positive and constructive words from a single leader can have a ripple effect. This is my hope that we would continue to see these kinds of words that encourage unity and solidarity among our oppressed people coming from leaders from other ethnic groups too.

We deserve unity and living harmoniously regardless of our differences in tradition, language, religion, ethnicity, and political views.We have a common destiny. No one ethnic group could be able to carve its only destiny while the rest is going to hell. That was the system TPLF designed and have been nurturing in the past more than 24 years. They thought that they could enrich and empower a few of their inner circles marginalizing the majority.

This divide and conquer approach is an old trick used by colonizers. Ethiopians never bowed down to any colonizer then. They won’t NOW! It took us five years to defeat a colonizer long time ago. This time, it took the descendants of those extraordinary heroes and heroines a little longer because this time the colonizer is one of us 🙂

Slowly but surely, the veil is removed from the faces of the majority of us. NOW, we could be able to reclaim our dignity.We have rich history and culture. We deserve decent and honorable leaders who represent who we are. The few elites at the top of TPLF are the worst of us 🙂 That is okay this time. We learned from our mistake. But, this must not happen again!

NOW, we must shape our destiny, and this time, we shouldn’t allow less honorable leaders to lead us into division and self-inflicting in fights. Play your role. We shouldn’t leave this responsibility to our leaders alone. Don’t stand at the sidelines and hope honorable and competent leaders would come at the top to lead us to our Canaan. We are honorable people and deserve honorable leaders from top to bottom but that cannot happen unless we join hands and play our share toward inheriting a bright future for this and the coming generations.We shouldn’t allow chance to choose the wrong leaders any more and get tortured for decades by unfit and unworthy few.We should put strict requirements before we crown our next leaders locally, organizationally, at community and national levels.

Play your part. Be the leader yourself wherever you have the passion, talent, and experience. What are you waiting for? This is your hour! It’s your turn!Don’t give away your destiny others to tarnish it. Be in charge and play a proactive role wherever you are! You’re one of the important ingredients for the success and sustainability of your community/organization in particular and our country at large. Without you, we are incomplete! Say no to wrong leadership that divides and causes pains like TPLF leaders have induced in the past quarter of a century! New era: new approach. New hope: new leadership expectations. Leadership makes or breaks. Say, I won’t allow leadership to break us. Commit yourself and say, not on my watch!