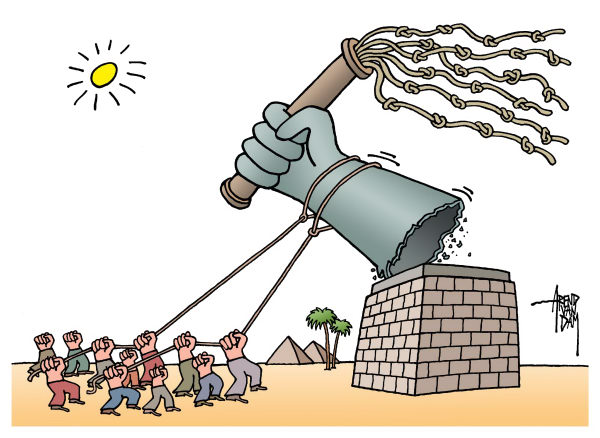 In the last couple of decades, people around the world fought and toppled dictators. Courageous Africans removed dictators from Benin, Zambia, and Ghana in the 90’s and early 2000. The Arab Spring that took place in the northern African countries such as in Tunisia, Egypt, and Libya ousted despots.Likewise, successful revolutions in Asia like the one in Philippines (Yellow Revolution)that took place in 1986 overthrew President Ferdinand Marcos. In the beginning of the new century, Rose, Orange, and Tulip revolutions in Georgia, Ukraine, and Kyrgyzstan, respectively,made successful transitions to democracy. Time doesn’t allow us to cover the detail accounts of these revolutions, and the contributions of leadership toward their success. However, it’s noteworthy to pick one of the success stories from our own continent- Ghana, and expand a little bit and show you the critical roles leadership played.

The leaders of the Ghanaian revolution were wise when they decided to setup a formidable coalition called Alliance For Change (AFC) in 1995 to lead the movement. The alliance was composed of ten influential leaders who gained a wider array of support. They forced the government, its international donors, and finally succeeded to carryout a democratic transition. For instance, they put all donors and creditors on notice that any loan given to the dictatorial regime in Ghana will not be paid back. They also demanded that a free press and media be established in Ghana before the grant of any aid. These and many other strategic choices by the leadership finally brought democracy in Ghana.

On the other hand, Occupy Wall Street (OWS) could be considered as one of the latest unsuccessful revolutions. By all accounts, OWS met the most important criteria of a successful people based movement. It had millions of committed, and passionate (sometimes violent) followers. Sadly, it failed but why? There could be all kinds of other reasons why it was broken but there is no one single factor like leadership gap that contributed toward its demise. OWS left its indelible mark on human history as a futile movement that initially attracted millions to its cause. Because of lack of leadership, all the efforts, and sacrifices of those courageous young people ended up fruitless.

What about our own movements? In the past couple of decades, we Ethiopian tried our best to topple dictators. Initially, we were successful. The students’ movement in the late 60’s and early 70’s deposed the Haileselasie feudal regime. Wait! That isn’t accurate. It weakened the regime but the revolution was hijacked by the military regime at the 11th hour. Regrettably, since our country took that wrong turn, she went from worse to worst, and we never recovered from that fatal misstep because of lack of leadership that failed to finish the job.

No one forgets the movement led by Kinijit (CUD). Initially, it was promising.It inspired Ethiopians in the country and around the world. People for the first time in our history witnessed extraordinary leaders on Televised debates making fool out of EPRDF leaders. But,it finally went to ashes. Why? Don’t tell me that the revolution was crushed because TPLF was undefeatable. It was a leadership gap! No question.Most of the leaders of CUD were competent, capable, and courageous to face off against the brutal regime. The majority of them were genuine and smarter than the leaders of EPRDF. CUD leaders obliterated the latter in the majority of the debates. Don’t misread me here. Not all members of the leadership were equally responsible for CUD’s dysfunctional leadership.No need for name-calling. What is important to note here is that, at the end of the day, not only the movement was quashed, as much as it aroused the hope of millions of Ethiopians, it caused Ethiopians to never trust or depend on political coalitions.

It may be too early to make any conclusion concerning the ongoing movements that are currently challenging TPLF: The Muslim communities demand for religious autonomy, the Oromo people’s revolt against TPLF’s rule, and other revolts in Somali, Amhara, and Southern regions that are going on right now. Like other successful people-based movements, some of these movements have thousands of committed, courageous, and passionate followers. Some of their leaders died while others injured, and still many jailed but they are still in the fight. Regardless, though we don’t need to make any conclusion about the future outcomes at this stage, we should be honest with ourselves and ask this question: Why these movements unable to go to the next level, and achieve their goals? It’s okay if we don’t agree on who the culprits that are responsible. One thing I’m hoping you may agree with me as one of the challenges facing these revolutions could be a leadership gap. The goal of this article isn’t to put blame on any one person or group. This gap was created by all of us, both the people and leaders- Muslim and Christian leaders, and leaders from all ethnic groups. Let’s take collective responsibility and begin playing our share to bridge the leadership gap and topple the dictatorial regime in Ethiopia. Let’s quickly review some of the characteristics of AFC leadership and learn some lessons (we don’t need to duplicate every thing) to address the leadership gap that faces our community. AFC’s leadership was:

In conclusion, we have seen how leadership played critical roles toward the success or failure of many movements around the world. We have also quickly revisited our history and acknowledged why past revolutions failed. We also drew some lessons from others’ experience. Now, this is time to learn from our past failures and make changes to bridge the leadership gap that has been denying us from toppling dictators. George Santayana said, “Those who cannot learn from the past are condemned to repeat it”. Here are some questions we should ask and get answers:What do our current leaders learn from our past leaders such as Haileselassie, Mengistu, and Meles? What were their strengths that our contemporary and future leaders should adopt, and weaknesses that they should not repeat?What kinds of leaders do we need in the fight against a brutal regime that has already divided us? What types of leaders do we need during transition from dictatorship to democracy? And who would be fit to lead us during post conflict Ethiopia? What are the leadership qualities and styles we should expect from our leaders considering our objective conditions on the ground and the immense challenges that we face?In an effort to contribute my little share toward bridging the leadership gap, I’ll write a few articles in the coming weeks and months, and look forward to hear your feedbacks. These articles will attempt to answer some of the above and other similar questions. Stay tuned.