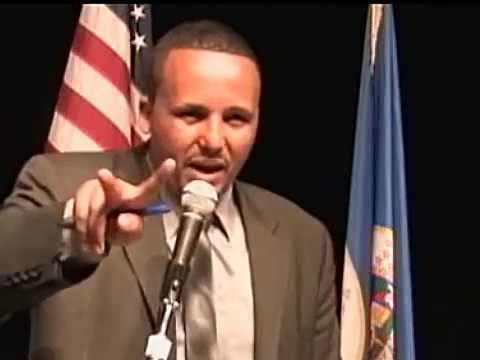 Political/Social activists fight against injustice, suppression, and inequality and in the process, they give their lives to make life a little better for millions of others.

Two world-famous activists are Martin Luthor King and Nelson Mandela. While the former gave his life fighting for equality for African Americans in the USA, the latter spent twenty years of his life in prison fighting Apartheid. While activists may naturally belong to one religious group, they never encourage beheadings of followers of other religions, while they may belong to one ethnic group, they never encourage ethnic cleansing as a strategy for liberation. While they may belong to one gender, they never advocate for the elimination of the opposite gender. Nelson Mandela was struggling against a system created by Europeans who came from a different continent, however, he never encouraged native South Africans to kill white South Africans.

If we can ever call it activism, Jawar Mohammed’s activism was always different from the standard political/social activism. When the evil TPLF was in power killing, torturing and looting Ethiopians Jawar was speaking out against TPLF’s suppression via his newsmedia, Oromo MediaNetwork (OMN). However, he was also known for being ethnocentric and a religious fanatic.

One of the venues Jawar used to explicitly define his agenda was at a conference organized in Minnesota for Muslim Ethiopians in June 2013. In that meeting, he said the following in Amharic to the attendees. “እኔ ስለ እስላም መናገር የጀመርኩት አንድ ጐንደሬ ጓደኛ ካገኘሁ በኋላ ነው” The direct translation is “I started speaking about Islam after meeting a friend who is from Gonder.” By that, he seems to imply that Muslim Ethiopians are mistreated in Gonder (a city with Christian majority), and then he continues. “እኔ በኖርኩበት 99% ሙስሊም ነው ስለዚህ ማንም ደፍሮ ቀና አይልም በሜንጫ አንገቱን ነው የምንለው.” Here he is saying, “In the place I came from, 99% of people are Muslim and no one else will dare to walk with their heads up as we will get their necks with a sickle (curved blade)”.

Jawar was implying that, in the village where he grew up, if Christians are to say anything against Muslims, they will be beheaded. Hearing a Stanford/Columbia educated Muslim Oromo Ethiopian to propose these hatred and violence loaded solution to an alleged problem between Muslim and Christian Ethiopians was astonishing. The fact that he was talking about beheading Christians the same year he obtained a master’s degree from Columbia in human rights makes you wonder what type of human rights classes he attended while in school. In the same speech, Jawar intentionally disregards half of the Oromo population (which is Christian), linking the struggle of Oromo Ethiopians for freedom and democratic rights to the struggle for the Muslimization of the Oromos.

History tells us that Ethiopia is one of the first countries to teach world religious tolerance by hosting Prophet Muhammad’s first followers who fled from the persecution of pagan Arabs. Ethiopia is also the first country to allow Islam to be practiced. Ethiopia is still known as a country unlike others, where Muslim youth clean churches for Christian holidays and Christian youth clean mosques for Muslim holidays in an amazing gesture of brotherhood. However, none of those historical realities seem to matter to Jawar.

Woyane leaders who ruled the country for close to three decades and have done a lot against Ethiopian national interests were also well known for the following,(1)They were vehemently against Ethiopian unity,(divide and rule was their motto)(2)They interfered in Muslim religious institutions and tried to destroy the Ethiopian Orthodox Church (as they know the church is one of the glues that’s been holding Ethiopians united for centuries). While they have done a lot of harm, they were unable to attain their wishes.

It turns out that Jawar is a good student of the TPLF. Besides recently admitting he is strategically aligned with the TPLF, he thinks he is the messenger who can accomplish the two things TPLF failed to accomplish after twenty-seven years of brutality It is now clear that the same killer and torturous beasts are also fully behind him and supporting his ideals.

Despite Jawar’s rhetoric about freedom for Ethiopian Oromos, his actions speak loudly about the fact that he is completely against the idea of establishing a democratic Ethiopia via unifying and stabilizing the country, and that is why he despises Dr. Abiy’s “Medemer” philosophy, which is about bringing progress via unifying all ethnic and religious groups in the country. For the same reason, he and TPLF are completely against EPRDF sister parties unifying to establish a new progressive party.

Unlike other political figures, it is very clear that Jawar went home not to help pave the way for a democratic Ethiopia, but to make sure his popularity is used to satisfy his personal ambitions at any cost. Thus, he recklessly brainwashed some of the Oromo youth (qeerroo) imposing a cult leader like influence upon them. That was very clear from the brutal actions his supporters took on innocent citizens as soon as he called for protection on his FaceBook page on the night of 22nd October 2019. His supporters, who have clearly listened to his rhetoric, took their anger to the streets, killing others that belong to different ethnic groups. Some burned churches and houses that belong to others. Among the victims were also Oromo Christians and Oromo youth who were trying to protect other victims.

That day close to eighty-nine innocent Ethiopians (including kids and women) were killed. The same day two protestant pastors got beheaded in Sebeta, near Addis Ababa. Alas, Jawar tainted those kids and turn them into egregious criminals that will likely spend most of their precious lives in prison while he will be raising funds to continue his criminal actions.

The burning of churches and the killing of innocent Ethiopians including a college teacher and a college student in Dire-Dawa, where Jawar had several meetings with his supporters is a clear indication of how much he had infected some of the youth in that area with a virus called “extreme narrow mindedness” or “ዋልታ ረገጥ መንደርተኛነት”.

Based on his hate speech and his recent reckless actions, it would be highly inappropriate to call Jawar an activist and put him among selfless human rights defenders. However, it is clear he did secure a place closer to the late ISIS leader, Al-Baghdadi who in the name of Islam mercilessly killed thousands of innocent Muslims and Christians including women and children. So, no one should deny Jawar the name he earned which is the Al-Baghdadi of Addis Ababa.

In 2015, Al-Baghdadi gave the order for thirty-five helpless Ethiopian and Eritrean immigrants to be beheaded in Libya. His actions clearly indicate that he wanted to incite religious intolerance in one of the oldest Christian nations that welcomed Islam with open hands. Al-Baghdadi hates Ethiopians because they are helping Somalians and the world fight against Muslim extremists that are destroying neighboring Somalia.

The fact that Jawar’s followers are repeating those heinous Al-Baghdadi style criminal actions on Ethiopians on Ethiopian soil is beyond reprehensible and unacceptable. Clearly, Jawar’s goal is not to improve lives for Oromo Ethiopians, but rather to create a caliphate called the “Oromo Islamic State” and be a “Calif” in one of the oldest Christian nations in the world.

Jawar Mohammed (Al-Baghdadi of Addis Ababa) should face justice without any delay for the crimes he committed in Ethiopia!! Criminals like him do not represent Oromo or Muslim Ethiopians. We call upon Abiy’s government as well as the US not to allow Al-Baghdadi of Addis Ababa (a resident of Minnesota and a US citizen) to go unpunished for perpetrating inhumane criminal acts via his supporters on innocent Ethiopians on October 23rd, 2019!

We call upon all Ethiopian Christians and Muslims to stand united against extremism of any kind!!

May those Ethiopians who lost their lives through senseless killings at the hands of Jawar’s supporters rest in peace!

May God bring Peace and Stability to Ethiopia