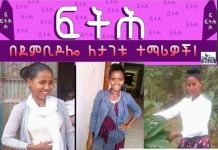 It has been nearly two months since 18 University students who were on their way back home from Dembi Dolo University were kidnapped, in Oromia region. Among these, 14 are female students. Different sources including one of the captives escaped confirmed this fact in her interview with BBC Amharic. In early of December, some of the victims contacted their families through phone in the first week of the kidnapping. However, ever since no one heard from them. Some parents stated that even if they went to the University they could not find their children. Various sources including one of the students that escaped the abduction revealed that the students were taken hostages by gunmen in the Western Oromia region.