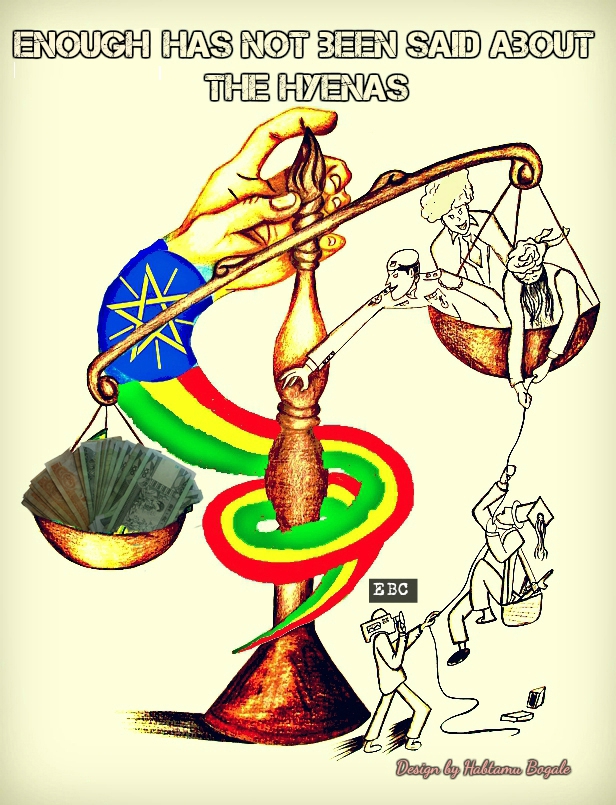 I recently published an article on this blog titled ”me, my country and corruption”. Its about corruption. Where by I have tried to discuss the rampant corruption by the Ethiopian dictatorial regime. The article articulated the issue from different perspectives. Aiming to give a general frame work how systematically complicated its together with remedies. For any one reading this, I kindly request you to read my previous article to have the full grasp. Here is the link-Habtamu Bogale’s blog. I am gladly overwhelmed by the feedback in such short period of time. It has been published on Ecadforum, Zehabesha, Quatero, Goolgule.com. Watch Africa and many more other websites and blogs in different parts of the world. I would like to take this opportunity to thank all for taking their time to read, publish and comment on it. I am particularly grateful for Habtamu the administrator of this blog for his unreserved hard work. I have also got comments ranging from encouraging remarks to offers in future cooperation to  tackle the issue. Corruption in Ethiopia.

As I was preparing my self to write another article, one particular comment I received on the Ecadforum website helped me a lot in to putting my ideas to a desirable perspective. This comment is by a person identified as Wase. Wase commented as follows  ”Enough is said about the vices of the mean west and Ethiopian corrupt mercenaries!! Now is the time to follow the money hunt down the hyenas- names names- documents all – bring them to trial or else!!! no B S!!”. What an excellent comment. Thank you Wase. I could agree in the overall essence of your comment. However, in practical and realistic view of the issue I respectfully disagree. I will explain why. But the good thing is we have one very important thing in common. That is, we don’t want hyenas anymore. We want to put an end to the fairy world of Ethiopian dictatorial corrupted leaders. For the sake of all of us suffering. Or  for crying out loud for the sake of 8 million people starving to death in Ethiopia as I am writing this. Now, please allow to explain why I disagree.

Enough has not been said.

Wase in his comment said that enough has been said. But with due respect, I think enough has not been said. My argument, If enough was said, then why do we still have the corruption in a worsening trend? I would say enough has been said, ONLY when whatever has been said bring actual, tangible & significant effect on the issue. If not, which the practical reality depicts, we need to say more and more.

To even break it down. The basic question is the platform to say. I know for a fact that there are countless many people including me with evidences and stories that can expose corruption. But what do they do with it? Where should they go with it? Where is the platform to accept and process this information? Should they go to ETV (Ethiopian state television) or FM radio stations? Which are totally owned by the dictatorial regime? I don’t think so. These medias are the right hand propaganda machinery of the dictatorial regime. According to a recent study conducted about these government medias. It was stipulated unquestionably that, they function as merely as a dedicated public relation of the government. They have done nothing at all to address societal issues as any normal media should do. Then, Should they go to The Ethiopian federal ethics and anti-corruption commission? Maybe but what will happen is probably either nothing or the moment they left the premises of the commission building their identity will be forwarded to those they accused in the first place. This of course will practically put them in an immediate danger. The strong private printed presses are not any more there. The publishers and the journalists are in exile or in kality prison. The remaining private printed medias and FM radio stations are not interested to address these issues. They are more interested to talk about the English premier league in a fine detail manner, may be about Ronie’s new hair or about celebrities like Rihyna’s new hair cut.

This is to say that there is NO platform in Ethiopia to expose corrupted officials in spite of having evidences and proofs. This is a practical raw fact on the ground. I think the first thing that must be clear about the corruption in Ethiopia is, its systematic. So, part of the system is, the lack of or literally absence of a platform to expose corruption. The very reason I am writing is to create a platform. I am hoping to create this platform with many others. A central platform to receive, process, analyze corruption information and exposing it. When we have such an organized platform, then we say more, we expose more to bring actual, tangible and significant effect on the issue.

Wage also said in his comment “…now is the time to follow the money hunt down the hyenas”. Its true. We must follow the money and hunt the hyenas. But let us do some reality checking. But before that, this phrase ”follow the money” reminds me a very important persona in the watergate’s scandal of USA called deep throat during the 19 70s. I would say this scandal was the biggest in the history of the modern world. This scandal shows the bravery of two journalists from Washington Post in exposing this scandal. It was not a bed of roses for these two journalists. In their tiresome attempt to unravel this scandal they have faced many formidable challenges. At a certain time, they reached to a point of losing everything. Their carrier, reputation and even the credibility of Washington Post itself. And ”deep throat” was quite crucial informant to these two journalists from the deep and dark corridors of bureaucracy. Without him it was impossible to crack down the intricate that spans from White House to CIA. At the end, when it was fully exposed to the public. The grave nature of the compelled president Nixon to resign. ”Deep throat” always advise the journalists to “follow the money” every time he them with a very important piece of information. 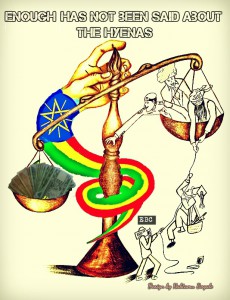 But this was in the USA, where the journalists have every right to gather and investigate information, work freely, independently without the fear of being persecuted. No matter what, all government structures functions within the boundaries of the law. As mentioned, even the president was forced to resign. This is an environment, whereby even the president (the most power full person in the government) is NOT above the law. Even in such environment it was not easy to crack this scandal. It was challenging but possible.

Now, back to the reality checking. Do we have such environment in the dictatorial regime of Ethiopia? Is the law above all? Absolutely not. The dictators, the ruling party leaders changes and breaks the law when they wish to do so. Do we have the environment for the investigators and journalists to work freely and independently? Can they work without fear of being persecuted? My reality check beams with a big red light. Ethiopia ranks 3rd  in imprisoning journalists next to North Korea and Eritrea. This is without taking in to consideration those who have been killed and thrown in to jail for the crime they didn’t commit but expose corruption.

Its clear that there is no conducive environment to implement the ”follow money” approach. In principle this is why its also called a dictatorial regime. Again when we say it is a systematic corruption. Creating a ”jungle rule” environment is part of this systematic corruption. The leaders are above the law. Dictators don’t abide by the law. Thus, the approach we follow to curb the corruption in Ethiopia must take in to consideration this environment. Its important. Otherwise, any attempt will be a fantasy on ”follow the money” trail without ”deep throat”.

The final line of Wase comment says ”…..name…name- document all- bring them to trail or else….!! no B S! ” Quite wonderful words. Let us see this point as well on the ground. On practical terms. For me it sums up to an element of how to expose? To what effect? I ask again, Is popping up names and documents on the net will solve anything? I dare to say, not really. To begin with, its impossible to do this for someone in Ethiopia, as it pose the inevitable immediate danger. But even for those in the diaspora community it poses its own challenge. To be practically clear. I reside in Europe and I have information (names and documents). I have definitely try to expose, but it turns out, up on receiving my information some reacted but their reaction didn’t bring a sustainable effect I wished other than putting me in a spot light. Some are still trying. Some are entangled with their own extreme political agenda. One can see how frustrating it could be! If we expose and nothing is being done then we literally helping the corrupted to hide evidences. We are helping them to clear their mess. On the other hand we are also putting someone in danger.

So, it should be clear again and again. We are talking about a systematic corruption. Where the system make sure any attempt to expose will be null in effect. This system continuously works to disintegrate and weakness any attempt at all.

When up against anything systematic. One ought to think systematically as well. As simple as that. We have to start from the basics. The remedy for corruption in Ethiopia should be engineered with this mentality. If not what is the use of  an army, with no adequate information of its enemy? For me its not even an army, other than posing as one. This is not” let’s rock it !”scenario. Not at all! We need to Organize the rock band to rock with, in the first place. We need good drum, base guitar, lead guitar players. We need both lead and support singers. We need to train a lot. Then we have a good band. And only then, we can say ”let’s rock!”. We can propose and talk about names and documents, as well as trials metaphorically speaking. For all of us it must be crucially clear that corrupted dictators within the dictatorial  regime of Ethiopia are not simple hyenas to be hunted with only enthusiasm, wishes and slogans. We are facing hyenas with a cognitive skill. These hyenas at least systematically make sure that we don’t have the platform to expose them. They have managed to create an environment where by they are above the law. So far they are effective to nullify any attempt of exposure.

Then, I ask, how can we hunt these organized, above the law thieves and hyenas?

I suggest we need to say a lot. We have to deliberate immensely to crack down their deep systematic loathing of the nation. We need to come up with a centralized movement that could massively mobilize the public to create an effective and efficient shock that can scare these hyenas. Something like a very smart lion. The black lion as our ancestors used to be or as we were once.

The task ahead for anyone interested to curb corruption is tough. Its should commence from a deeper understanding of the dictators systematic corruption. Brainstorming on how to dismantle the system follows. Receiving, processing and analyzing of information as an input should be integrated. Along with, a massive public awareness has to be created, in order to mobilize a movement against corrupted system. I believe such movement will give us the sustainable solution we all aspire. As George Orwell once wrote, “In a time of universal deceit telling the truth is a revolutionary act”.

Lets bring the truth out loud!