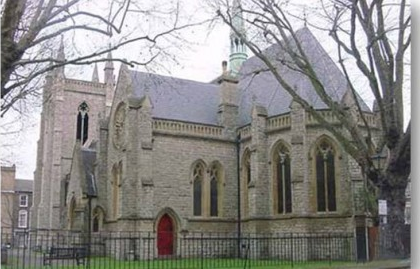 This is Debretsion Ethiopian Orthodox Church in London England. The picture seems to have been taken on a cold winter day. It is such a beautiful church. Doesn’t it look so serene and peaceful? I am sure it is that most of the time. But according to this video it was nothing but serene a few weeks back. The best way to express the twenty one minute video is it felt like was watching a scene where the mental patients have taken over the asylum.

I agree it is totally depressing to see all classic Ethiopian behavior on display in a controlled environment. The location being a church gives it that special quality of raising the bar to show how low we have sunk. Such a brawl in some obscure hall, how ugly it is, normally is not worth a mention. I guess we get so consumed with the righteousness of our cause that we toss out all civilized behavior out of the window regardless of the place or the time.

The video is not intended to be a work of art. It is not fiction that jumped out of some ones imagination. This play does not have a director, a producer or a lead actor. This video is real unrehearsed presentation of Ethiopians and their social interaction. The setting adds to the drama of the moment. We thank the individual who had the patience to record reality in that hallow ground.

If you care to dig deep deeper into the story you will find out the reason to the madness you are subjected to watch but that is another story all by itself.  Unfortunately having an excuse does not justify bad and shameful behavior. Wrong or right does matter but with this short presentation that we are left with all we can do is watch and marvel at the utter stupidity our situation at home and abroad.  I am interested in parsing out what fate has presented us- a way to watch ourselves from afar. It is priceless.

As I said before the setting is Debretsion Church in London, England and all those present are immigrant Ethiopians. All come to Debretsion by their own free will. We assume they are followers of Christ AKA Christians. For Christians a church is a most hallowed place. It is God’s home. Christians go to church to pray, praise the lord and cleanse their soul of evil thought and bad feelings. We expect love, understanding, forgiveness and chartable acts to flourish in such a location. Is that too much to ask?

It looks like Debretsion is not such place. The fathers and mothers the sons and daughters of Debretsion are not one happy family. Obviously they got a problem. The twenty one minute video is a general example of how the unhappy group went about cooling tempers and looking for solution. It speaks plenty on how we go about resolving differences in a civilized manner. I think it is safe to conclude this gathering to be a microcosm of the bigger Ethiopian society both at home and in the Diaspora.  We take pride in our dysfunctional behavior. Look at the combatants of Debretsion.  They make us all proud.

After watching twenty one minutes of the meeting do you think there is a lesson to be learnt?  I know it looks totally hopeless doesn’t it? How could all those adults act in such a lawless manner? How do they justify such shameless behavior in front of the young people? How do you think their kids are going to act in a social gathering when they have seen their parents foaming at the mouth inside a holy church? What kind of anger forces a sane human being to be so hating and threating with all sorts of nasty acts?

The last forty years have been a time of upheaval in our country. It has affected our culture in a profound manner. The last two dictators although lacking in the art of leadership were richly endowed with mental deficiency, mental illness and were given to delusion of grandeur. Our old culture has experienced disruption in a major way. We are the result of an aborted development.

The biography for Debretsion London church give nineteen seventy six as day one making it about thirty seven years in the making. It also says it is paid for. My first reaction is how fortunate they have such a united and generous community and are able to worship in such a beautiful church. I am sure some people worked hard thru the years to make it happen. Not all of us can put time, effort and money to achieve such goal. Because of the hard work of the few now they have a place of their own to enjoy and grow. They make their congregation and all of us in the Diaspora proud.

That scenario works among civilized people. By civilized I don’t mean high rise buildings, airplanes, factories, highways and stuff. I mean people with culture and pride. People that don’t have to shout to be heard. People that know their place in history. People that have already lost so much by being displaced from their homeland that a little compassion and caring for each other in a strange land will be the norm.

We are unable to do that. Debretsion is just one example of the disfunctionality that has taken over our social interaction. Debretsion has been repeated in every Diaspora assembly no matter the cause we are trying to create a common ground. This sickness of demeaning each other, belittling our efforts, slandering those who work on our behalf and routinely dismissing any and all ideas has become something to be proud of.

Debretsion Church is an example of a confused and rudderless crowed easily whipped into frenzy by a few anti-social elements. Why do you think that is so? Yes I am asking you the reader why do you think a few can disturb the peace of the many? My simple answer is because we let them! We know something has gone wrong, we know things are not right but our first response is to sit quiet and watch. We seethe inside, our stomach turns, we are very much disgusted but we keep quiet. We don’t dare tell the rowdy ones they have gone too far, we are not familiar with the word NO!

I am also sure after the assembly and meeting we will find plenty that will show disgust and alarm with the noise makers. They will even become animated explaining how offended they felt. There is a saying in our country ‘jib kehede wusha chohe.’ That is the story of our existence.

I can see all this because our Church was a victim of the same ruffian type behavior. Those who felt change is necessary were too lazy to work within the system. They felt a short cut was acceptable since their position was such that ‘by any means necessary’ was an acceptable method. They packed the assembly, they registered new members and they brought their loud mouth to silence anybody that stood on their way. Winning was the only outcome acceptable to them and the price did not matter. Destroying the church to save the church seemed to be a good idea.

Out of the millions of options in front of us we seem to choose the one that hurt ourselves and those around us. We can leave an association if we don’t agree with the direction it is heading. We can relocate to a new neighborhood if we don’t like the location we are in. We can quit a job if it does not meet our monetary and social needs. One is free to change a church if the current one does not satisfy one’s spiritual need. We Ethiopians do not exit with grace. Most of us will wreak havoc on the association, burn our home, badmouth our employer and destroy our house of worship before we leave. We are not programed to accept a simple amicable divorce. In the end we all lose.

They say a picture is worth a thousand words. How about a video in living color? This video is priceless. It says many things about us in the Diaspora. There is no reason to assume we are any different over there either. By over there I mean Áger Bet, Ethiopia. In fact we are a duplicate, warts and all.

It is definitely a surreal scene to watch some taking a video of this madness as if to preserve it for future reference while a few were sitting in silence seeming un affected by the chaos. I knew I was entering a new dimension when I saw the Metropolitan Police walking among the combatants. He was not asking for silence, not demanding attention or clearing the scene but quietly showing his presence but allowing the play to go forward.

So the question in front of us is- are we going to learn from this madness and change?  Are we going to be responsible for our actions not to be led by the crazy and idiots among us? Are we going to judge matters on their merit or base our stand on ethnicity, marriage and friendship? Are we going to sit and listen to each other as adults or pace around like a wounded animal? Are we going to work thru the system we ourselves set up or improvise as needed and change the rules to suit an individual? Are we going to give respect to those that work hard to create something and give them credit or demean their efforts and slander their work?

I will give you an example you can try. The next assembly of Ethiopians you meet weather in a coffee shop, Lekso bet or Eder mention any of the organizations working on our behalf like Ginbot 7, Andenet, ESFNA and see the reaction. The first thing that comes out is a barrage of insults, demeaning language and put down. Most probably the individual has never attempted to know, read and find out the goals and plans of the organization. Has never contributed monetary and other help to help them achieve. It does not stop them from being rude. They are always willing to vent out insult and defamation no matter what.  Our community needs help. God help Debretsion and God help our country. Now watch the video below and see Debretsion in all its splendor.