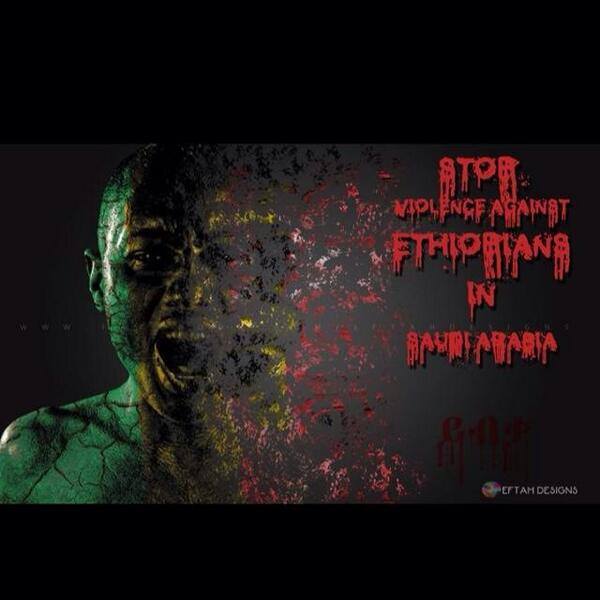 Editor’s Note: with this news report, Getahune Bekele, also sent us a picture of an Ethiopian woman drenched in blood while lying on the ground. The picture is highly graphic and may offend and/or trigger sensitive viewers and is not recommended for viewing by persons under the age of 18. We emphatically advice our readers to view it at their own discretion. Please click here.

“Take the money and even my luggage but please don’t rape me and I implore you, don’t take my life…” an Ethiopian woman’s impassioned plea to a Saudi Arabian religious police commander at Amira Nura university near the capital Riyadh- Saudi Arabia.

Approximately 1400 years later, while the sepulchers of prophet Mohammad’s relatives who were the first refugees in the Christian kingdom of Ethiopia still standing near the northern Ethiopian town of Wukro as historic piece of evidence to the two nation’s centuries old close ties, no one expected the mass murder of the children of Bilal by Saudi citizens in Saudi Arabia.

Nonetheless, it happened, causing incalculable grief in Ethiopia and as a result Saudi Arabia also losing her incandescent charm as the holy land of Islam.

Not that this dead Ethiopian girl earned a generous stipend in the medieval and backward kingdom of Saudi Arabia, a nation dependent on cheap slave labor for her daily survival. The slayed defenseless girl was there in Saudi just to escape the abject poverty blighting her country, a poverty created by successions of tyrannical oppressors but exacerbated by the current ruling minority junta, which openly practices an evil ethnic apartheid system in the 21st century. The young beauty meant no harm to the Saudis.

The 22-year-old domestic worker was crushed to death last week by a police bus at Amira Nura repatriation center in Riyadh-Saudi Arabia, during a scuffle with security forces. We withheld her name, as her next-of-keen is yet to be informed.

“The girl didn’t die instantly. First she squirmed in pain then her body was quivering long after the police bus that killed her sped off. Four hours later, they send morgue-van instead of ambulance, trussed her body like a dead stag, throw it disrespectfully onto the back of a van and drove away. They have unparalleled inborn cruelty you don’t normally see in humans.” A sobbing Zyad Saadiq Gutaa, 28, told the Horn Times from Riyadh by phone with her speech incoherent.

“Come to Saudi and see by yourself what the privileged rapacious Saudi slave masters are doing to our girls and woman in general, come and see please. They rape women who worked for them for years and bring them to one of various repatriation centers to be deported back to Ethiopia. No amount of compensation or justice will ever placate the victims. We are in peril.” Adds Zyad who registered for voluntary repatriation tearing to pieces her work permit. She was a legal resident of the Islamic oil sheikdom.

“They shot and kill migrant worker for no apparent reason and say they killed him because he tried to flee, but attempting to run away is purely a reaction fear.” Another Ethiopian migrant laborer said.

As one of the most feared supremacist TPLF warlords, foreign affairs Minister Tewdros Adhanom continues to play a melodramatic political point scoring game at the expense of thousands of afflicted Ethiopian migrant workers, the barbaric and brutal attack on woman and children by the fading kingdom’s notorious religious police is reaching unprecedented proportions.

The cry of raped woman and tortured men is echoing forlornly in the desert with the international community and the Ethiopian ruling minority junta simply looking the other way. In the teeth of these extremely vicious attacks, demonstrations staged by diaspora Ethiopians from the US across Europe did not make the royal family of Saudi Arabia suspend their cruel decree or lose their spitting venom against the defenseless migrant workers, or rein in the over- scrupulous religious police synonymous with beheadings and rape.  The carnage and bloodletting is continuing.

According to the Horn Times reporters in Addis Ababa, Ethiopians, grinning and bearing the tragedy, are currently staring huge-eyed at their ruling junta which violets every norm of how a responsible government should behave in the face of such criminal acts. They are also staring at the savage kingdom of Saudi Arabia in utter astonishment, completely rejecting all the nonsensical fancies preached to them about the so-called benevolent and munificence country of loving Mahras or land of myriad treasures.

“Instead of twitting the number of returnees and taking pictures with them for political point scoring, our so-called foreign minister supposed to summon the Saudi Ambassador to his office and issued him an ultimatum. However, we all know the junta does not have that courage of offending the Saudis, who, in all probability, would immediately start backing the opposition to speed up its demise. Hence, as long as the dead are non –Tigre Ethiopians, the minority junta wont intervene in any form to end the suffering of Ethiopians.” A respected political analyst explained to the Horn Times from Addis Ababa.

“Ethiopians are used as scapegoat by the nervous royal family to divert attention from other pressing issues as a tide of desire for change start building up so rapidly within Saudi Arabia. We are talking about a wealthy family clinging to power by virtue of preserving traditional Islam, tightly controlling state administration, diplomacy, and commerce. The world’s most fiendish family and the only surviving absolute monarch is sensing the end of its supposedly eternal power. Drenching the land with the blood of migrant workers doesn’t guarantee prolonged stay in power.” The respected analyst who cannot be named for security reasons added.

In recent weeks, prominent Ethiopians have been calling on western powers to have the moral integrity to insist that the Saudi Arabian leaders respect all rights that were agreed upon when they signed the UN charter.