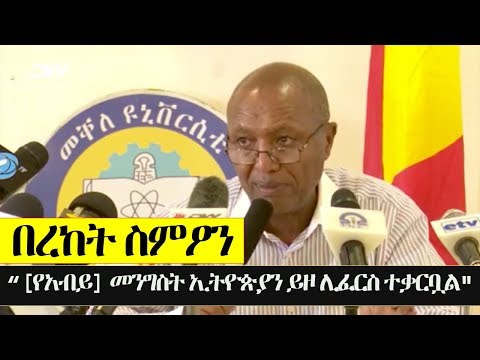 I never had the pleasure or the misfortune of meeting Ato Bereket. On the other hand I feel as if I have known him all m my life. We became very close after the 2005 general elections. When I first heard him speak, what surprised me most was his soft feminine voice that clashed with the impression of a fierce guerilla fighter I have envisioned. If you remember he was the one tasked by the petty tyrant to deal with the ‘opposition’ regarding the election. So I had a good opportunity to see him operate. He failed miserably. It was painful to watch.

Dr. Berhanu and Kinijit run a circle around him and his criminal grouping and made them the laughing stock of the world. They couldn’t even steal an election that was run by their own cadres. To say they were humiliated is making the tragedy bearable. Ever since then I have been fixated with Ato Bereket. He has never failed to motivate me to double my effort in my work to sabotage his effort to bring misery to my homeland. My quarrel with him is not personal but I always felt I spoke for those his misguided policy brought death, suffering, incarceration, exile and feeling of hopelessness. Ato Bereket to Meles was as Herr Goebbels was to Adolf Hitler. His job was putting lipstick on a Pig.

His official title was Communication Minster. Bereket was more than that. He controlled what was said, heard, published or discussed anywhere in Ethiopia. He was the face of ugly Woyane TPLF. Bereket joined the struggle against the Military Junta before he completed high school. He was born in Gondar, northern Ethiopia. His parents were Eritreans.  Bereket has an older brother that joined EPRP and was killed by TPLF in a firefight.  Berket joined his brothers’ murderers and changed both his first and last name trying to escape from the past. Most freedom fighters change their first name to protect their family but Berket went all the way. He was born as Mebrehatu Gebrehiwot. Bereket Semon is a name of an Eritrean fighter that was operating in Tigrai. The person is still alive but Bereket stole his name.

He also replaced his Eritrean identity with that of Amhara and assumed leadership of the Amhara organization on behalf of his TPLF comrades. He mislead the organization until six months back when he was unceremoniously dumped.

A bully like Meles Zenawi surrounds himself with weak individuals that enforce his twisted and criminal mind creations with enthusiasm and glee. Bereket, Seyoum, Abay were such errand boys that served evil faithfully.  Of all the petty tyrants creation Bereket was exceptional. Like his mentor cruelty, cynicism and indifference came to him naturally. His position as the right hand man of the tyrant gave him the spotlight to shine as arbiter of culture in our land.

Bereket could be said to have single handedly killed the media in Ethiopia. He shattered the budding free press and rode rough on all type of journalism.  He used ETV, Walta, Zami FM, Aiga and many more to spread disinformation, intimidate the opposition and create terror in the minds of Ethiopians.

Bereket has managed to steal two more elections since the 2005 debacle. All pretences of trying to look legal and honorable were set aside and his group won 100% of the votes. That is how insane our friend is. There was no trace of shame or awareness when the result was declared and celebrated as real and a proud moment in the history of Ethiopia.

The death of the tyrant was the moment Bereket shined and displayed the many years of experience in spinning unpleasant news. He kept the corpse in a freezer for over a month while he rearranged the deck on the titanic. Bereket orchestrated a funeral fit for mother Teresa. Bereket used the occasion to create dissent and bad will among our people. He made some eulogize the tyrant knowing it will create ill feeling in our society. He beamed the shameless display for the world to see. You can see some wearing dark shades, some hiding, a few covering their face and a majority looking stunned, disgusted and wishing they were anywhere else but there.

It is not only Ethiopians that saw through our criminal, European Parliament member from Portugal, the Honorable Ana Gomez after her encounter with him said “ Bereket Simon was Gobbles of #Ethiopia, as Propaganda minister of dictator Meles Zenawi. I will never forget his cruelty on 8 June 2005, with hundreds massacred in Addis Ababa, after stolen elections of May 15. I am for Truth Commissions, but worst criminals must go to trial.” Diplomats normally do not use such harsh language but Bereket brings the worst in people and the Diplomat saw him for what he was, a gangster parading as a servant of the people.

The reason I focused on Bereket is because he is refusing to go away silently, peacefully and without much fanfare. He loves attention and gets off being in the midst of things even if it is criminal enterprise. Well here he is this past weekend sitting on a dais and pontificating regarding our future. From what I understand he was invited to discuss the current situation by Mekele University.  Why out of millions of capable Ethiopians one will invite Bereket is not clear to me. Asking Bereket about building a prosperous Ethiopia is like asking the captain of the Titanic to teach about piloting a ship across the Atlantic. Both the host and the guest are operating in what is referred to as the ‘Neverland.’

True to form Bereket dove into the subject with zeal. He started off by claiming the ‘EPRDF was known for resolving problems through understanding and in a peaceful manner where hope was supreme’ He really said that. He went on to say ‘some are painting the last 27 years as dark time and those even in leadership position are claiming the regime was a terrorist and are heard disparaging the Constitution.’ He also opined ‘  …. there is concern because no one is giving direction on fundamental issues thus causing fission between the Federal and the Kilils (Bantustans) and between the Kilils themselves and they are forging ahead on self rule.’ His conclusion was to claim ‘All the indicators for a failed state are here and the possibility of rapid collapse is imminent’.

I told you the individual is mad. I am not a medical doctor to pass such judgment but in this case I believe the majority of Ethiopians are qualified to judge the Meles/Bereket/Syoum/Abay and their little underlings performance as the custodian of the Ethiopian State. When Bereket from that stage speaks of ‘tolerance, peaceful ways of resolving difference’ as part of his method of operation you know that he is a liar, a sociopath and devoid of human empathy. The Ethiopians whose life was cut short or was interrupted with lengthy prison sentence and untold suffering are here with us trying to survive as beast as they could. Because they are out of prison does not mean the suffering and nightmare will disappear. Meles and Bereket have left an ugly scar on our psych and we feel the pain of our brave brothers and sisters, mothers and fathers that crossed path with Woyane devil.

I am glad Mekelle University took the time to discuss the current problem facing us. It is a timely subject. Who to invite in such grand setting of higher education is not a simple matter. There are many factors that go into choosing a guest. Character, expertise, communication skills and standing among peers are but a few of the criteria required.  To make matter interesting including a different point of view will also enrich the discussion. Why Mekelle University choose to host Bereket who at the moment is on internal exile and does not represent any group is not clear. Why another individual was not invited for balance is dereliction of duty as place of higher learning.

What Bereket said from that stage is not acceptable at all. Predicting calamity in a peaceful land, raising the red flag where no danger exist is a deliberate and planned provocation against our peace and harmony. Using Federally allocated resources to fan hate and insecurity should not be tolerated. Insinuating the fracture of our motherland and threatening going it alone is not acceptable or advisable to the health and well being of the group one purports to speak for.

We know Bereket does not speak for the Amhara people since the organization has kicked him out. I doubt he speaks for the people of Tigrai since officially he is not a member of that criminal organization. As he claimed recently he is a homeless individual shunned by all and currently residing in a third class hotel in Mekelle. He created the concept of Kilil, and now he is left without one. Justice!